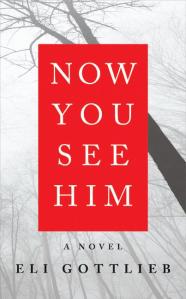 I’m not quite sure how Now You See Him ended up on my radar; I’d never heard of its author, Eli Gottlieb, before. Ann Patchett declared that the book is a “true literary page-turner in which a string of startling revelations unfolds within the constructs of lush and beautiful prose.  It is at turns both heartbreaking and breathtaking.”

Now You See Him depicts the mid-life crisis (although I think the character is only in his mid 30s) of of its narrator, Nick Framingham. Things might not have been so complicated and devastating for Nick if his childhood best friend, Rob Castor, hadn’t murdered his girlfriend and then killed himself. Rob’s death, however, is the catalyst from which Nick begins that horrible self-examination which seems to usher in middle age. Rob was, in Nick’s eyes, the golden child: beautiful, charming, funny, irreverent, talented (he attained celebrity for writing a book of well received stories and then seemed to drop off the literary map).

Rob’s mystifying death – how could someone who seemed to have it all, kill someone and then themselves? – sets in motion Nick’s own journey. It’s a significant one because he has a wife and children and his grief pushes him away from them. He loves his wife, but no longer feels connected to her. Instead, he laments what might have been with Belinda, Rob’s vibrant, kooky, beautiful sister.

This is a book, it seems to me, about loss and losing oneself. Nick is so full of anger and regret and sadness, it tears at the very thing that should sustain him in this time of crisis: his family.  There are dark secrets in Now You See Him and as those secrets are revealed one at a time, instead of freeing Nick they seem to anchor him more firmly to the past.

Gottlieb is a beautiful writer, Patchett got that right. This story is layered and moving and, at times, difficult to read. An early sex scene between Nick and his wife, Lucy, is devastating – especially difficult to read, I suspect, for those readers who are married.

Now You See Him is a well-written, intelligent book on the nature of friendship, family and love.