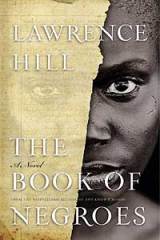 Everyone has been talking about Lawrence Hill’s novel The Book of Negroes for the past few months. When I worked at Indigo, it flew off the shelf; everyone wanted to read it. It’s one of those books – topical, controversial, well-written, award-winning  and with a central character that it is impossible not to admire. And I did  admire her, but  I didn’t love this book. I finished The Book of Negroes a few days ago and I’ve been trying to figure out what it was exactly that failed to inspire me to talk about it in absolutely glowing terms.

I am a child of the 70s. By that I mean, I was a teenager when Roots hit the small screen. Every night for however many nights that mini-series was on the tube, my family and I would gather around the TV, mesmerized and horrified by Kunta Kinte’s story. I haven’t seen it since, so I have no idea whether or not it holds up, but that story devastated me and made me ashamed, for the first time in my life, to be white. The Book of Negroes failed to reach me on some level.  Does that mean in the years since I’ve seen Roots I’ve just gradually become desensitized? God, I hope not.

Aminata Diallo, born in Bayo, West Africa, in 1745, is captured by slave traders when she is just eleven. We have barely settled into the rhythm of her life as a ‘free-born Muslim’ adored by her parents, before they are killed and she is captured. What follows is her life story. No question, it makes for fascinating, accessible and easy reading. But there was something missing for me, some emotional centre.

Aminita reaches America  after a long, brutal journey across the ocean. She is sold and quickly learns a new language and a new way of life. It is impossible not to admire her: she’s smart and resilient and tough. She has to be as she endures one tragedy after another.

And perhaps this is where I feel let down by the book: despite knowing Aminita’s story, I never felt like I knew her. In telling the story of her life, she relays the facts, all but stripping the emotion from them. The slightly unbelievable denouement, therefore, had little impact on me.

Should you read this book? Absolutely. Is it worthy of all the praise?  Yes, of course it is, because we should always be reminded that the struggle for equality is ongoing, that people still suffer because of their race or religious beliefs. Let’s face it, the world hasn’t really come all that far since Aminita’s day.

There’s a part of me that feels slightly guilty that I didn’t love it.  But I am glad I read it.