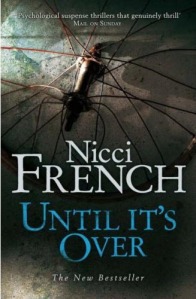 I can honestly say I’ve been a Nicci French (husband and wife team, Sean French and Nicci Gerrard) for over a decade, but I may have to quit them after reading Until It’s Over.

Astrid Bell is in her early 20s and works as a bike messenger in London. She lives in a huge house with university pals Pippa and her former boyfriend (and owner of the house) Miles. They share the space with Mick, Dario, Davy and Owen. They’re a family, in a sense.

Until It’s Over opens with an accident. Astrid is riding home from work and is almost at her house when someone opens their car door and Astrid goes flying off her bike. The woman in the car is a neighbour and she’s mortified at the accident she’s caused. Astrid is unhurt except for minor cuts and bruises. But later, the woman turns up dead. And hers is just the first murder connected to Astrid Bell.

Until It’s Over is supposed to be a mystery. About two thirds of the way through, though, the narration changes. Instead of following Astrid’s first person narration, we suddenly find ourselves in the killer’s head. I guess this was so we could understand their motivation. Um. The killer is Crazy.

Nicci French is usually such a dependable author -books that are  page turning, psychologically complex and fun. Until It’s Over was none of those things. I didn’t believe in (or care about) any of the characters. It wasn’t suspenseful. I often felt myself shaking my head in disbelief at the way characters interacted each other in a sort of oh please way.

I think if you’ve never read Nicci French – you absolutely should. But don’t read this. Read Killing Me Softly (which remains my favourite) or The Safe House.