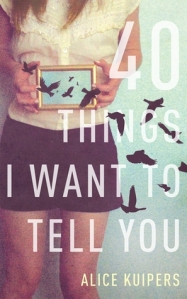 Amy, or Bird as she is called by those nearest and dearest, is a list maker. She’s super organized and has her future planned down to the last detail.

Bird is 16 and lives with her mother and father in a London suburb. From her bedroom window, she can look over into Griffin’s bedroom window. Bird and Griffin have been best friends since they were kids and Griffin and his family moved into the house next door. Recently, though, their relationship has morphed into something more romantic.

Bird seems to have it all together – so together, in fact, that she runs an advice column on a website. There are cracks though: in her relationship with Griffin, in her parents’ marriage, in her own life.  And Bird is about to learn that the best laid plans… Meet Pete Loewen.

I raised my gaze to see a guy lounging against the open doorway. I couldn’t help but notice that he was really hot. …He was older than us. He wore jeans and a black shirt with the words Born to Diescrawled over it. His sandy blond hair hung slightly long, like he hadn’t got round to cutting it, and he had stubble on his jaw line. he managed to look like he didn’t care about his appearance at all, and yet he was one of the – No, he was the most gorgeous man who’d ever walked into our school.

40 Things I Want To Tell You worked on many levels. Bird is engaging and intelligent. Pete is mysterious and, well, hot. When Bird’s world starts to careen off course, her problems are realistic and relate-able.

But one thing about this book did not work for me and that was the relationship between Bird and Pete. It’s not that I didn’t buy their instant attraction. It’s not that I didn’t buy where that attraction led them (*use your imagination*). It’s just that nothing about Pete’s story is fleshed out. There are all sorts of rumours swirling around about him, but we’re not privy to any of his back-story,  and neither is  Bird. It makes it hard to care for him, especially because he acts like a jerk to her.  And then he doesn’t. Then Bird acts like a jerk. But the problem is, I couldn’t ever root for them to be together – although perhaps I wasn’t supposed to.

That said – I gobbled up 40 Things I Want To Tell You pretty quickly and I will happily add it to my class library. I am sure my female students will love it.