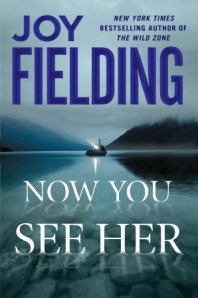 Well, there’s a few hours I’m never getting back.

I am not a book snob. I like a fast-paced, plot-driven suspense thriller as much as the next girl. Now You See Her, on the surface at least, seems like a book that would be right down my dark alley. Marcy Taggert is on holiday in Ireland. It was supposed to be a second honeymoon, but her husband, Peter, has run off with the golf pro from his country club and so Marcy has gone solo. While enjoying a cup of tea with a man she’s met on her day-trip to Cork, Marcy sees her daughter, Devon. Which isn’t possible because Devon is dead. (cue music)

I really wanted to like Now You See Her. For one thing it’s written by Canadian Joy Fielding (who has had a great deal of success in this genre). For another, I felt like I should be able to relate to Marcy. We’re of the same vintage, at any rate. But nothing about this book spoke to me.

So Marcy sees Devon and tears off looking for her. Of course, she doesn’t find her. But she returns to Cork and sets up camp and becomes more and more convinced that Devon is not dead. Marcy’s supposition might, in fact, be possible because Devon’s body was never found. She meets various characters along the way, some of whom have nefarious motives, some who want to help her. Some who think she’s crazy and as the book plods along it’s possible that crazy is exactly what Marcy is.

Here’s why the book didn’t work for me:

1. Marcy is stoo-pid. She actually meets a man in a pub and goes off with him after he tells her that, yes, miraculously, he knows her daughter. Really? Really?

2. The writing is clun-ky. Sometimes,  apropos of nothing, we get a little history lesson.  No one sounds Irish. The transitions are often confusing.

3. There are characters who just appear – out of nowhere – conveniently. Fresh baked muffins, anyone? Also, the characters are not believable. Seriously, wait until the lacklustre denouement, see who plays a part in it and then see how you’ve been mislead all along.  But not in a plausible way. Peripheral characters, Marcy’s son, for example, are footnotes.

4. If you are going to weave a tangled web, the spider at the center wants to be believable. Um. Just no.

I don’t know where Now You See Her comes in Fielding’s canon, but I won’t be rushing to read any more of her work.

3 thoughts on “Now You See Her – Joy Fielding”