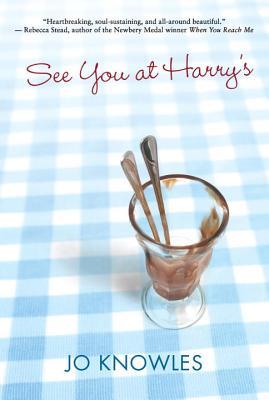 I spend as much time reading about YA fiction as I do reading the books, it seems; I am always adding new titles to my list and often the same book will be recommended time and time again. That was the case with Jo Knowles’ book See You at Harry’s. It was waiting in my mailbox at school today – I’d ordered it from Scholastic before the March Break. I started reading it during my third period Grade Ten English class and just finished it a few minutes ago.

The happiest day of  Fern’s life was the day she “threw up four times and had a fever of 103 degrees.” It’s a day lodged in Fern’s (yes, she’s named after the little girl in Charlotte’s Web) memory because it’s the day she didn’t have to share her mother with her two older siblings Sarah and Holden (yes, he’s named after that Holden).

That day at home, my mom spent every minute with me. My older sister and brother were at school, and my dad was working at my parents’ restaurant. I was eight and had never been home alone with just my mom before, at least not all day and definitely not with her full attention.

Shortly after Fern’s recovery, her mom discovers she’s pregnant and instead of being the youngest, Fern suddenly has to contend with a new baby brother, Charlie.

When See You at Harry’s begins, Fern is twelve. Her sister is eighteen, Holden is fourteen and Charlie is three. Her world is chaotic because her family is chaotic…and while Fern might not always get the attention she craves, in that self-centered way all twelve-year-old’s crave attention, she is by no means neglected. She shares a close sibling bond with Holden and there is much to admire in their relationship. Things are little more complicated with Sarah and there’s Charlie.

“Look. All little kids want to go to school. And kindergarten is pretty great. But it just goes downhill from there.”

Fern knows what she’s talking about, too. She’s just starting seventh grade and it starts to go downhill on day one. I think a lot of middle school kids will see themselves in Fern. She is, as her mother once told her, “a special soul.”

Fern’s parents run the family restaurant. Her mom is a little on the flaky side and her dad is always coming up with crazy  and embarrassing schemes to improve the business. In all the ways that matter, though,  this is a nuclear family. They aren’t perfect, but they are real. They’re distracted and selfish and  human and fragile.  It takes a  terrible  tragedy to  fill up their empty places.

While this book might not appeal to some of my  students (it is geared for middle school readers, after all), I think many of them will be quite moved by Fern’s family’s story. I was.

AT SCHOOL:
Join 443 other subscribers