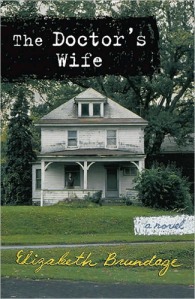 Interesting timing. I finished Elizabeth Brundage’s novel The Doctor’s Wife just a couple days before Dr. Henry Morgentaler passed away at the ripe old age of 90.  What do a novel and a  doctor who changed the laws regarding abortion in Canada have to do with each other? Well, it’s the polarizing subject of abortion which is at the centre of Brundage’s over-written and  uneven novel.

Annie and Michael Knowles live in upstate New York. Michael is an obstetrician who practices in Albany. Annie is a journalist who teaches at the local college. When the novel opens, it is clear that their marriage is rocky: Michael is a workaholic; Annie is dissatisfied with her role as mother and the doctor’s wife.

Then there’s Lydia and Simon Haas. Simon was a renowned artist, but now he’s a bit washed up and he teaches at the same college as Annie. His wife, Lydia, is much younger and clearly unstable. She’s also found Jesus and is hanging out with a bunch of bible thumping right wing conservatives.

When Lydia discovers that Simon and Annie are having an affair and her church friends decide that Michael’s new role at the local abortion clinic is worthy of punishment, The Doctor’s Wife propels the reader into page-turner territory.  But it’s a weird mash-up of social commentary and scorned-wife-gone-wild.

None of the characters in this novel are particularly likeable. Usually when people enter into an extramarital affair it’s sort of easy to choose a side. Simon might be sympathetic if you really had a better of understanding of his relationship with Lydia. Does he love her? Is he afraid of her? (If not, he should be!) Does he love Annie?

And Annie’s feelings for her husband are equally ambiguous. She is “no longer the college girl Michael had fallen in love with.” When she and Simon hook up at a faculty party it’s like they hop a fast-moving train that’s not able to stop until it either runs out of fuel or crashes. The fact that Simon is a bit of a doofus makes you question Annie’s sense.

I actually didn’t mind the affair part of the story. And Lydia was bat-shit crazy. Where the story really  veered off the believability path was how Lydia was involved with these crazy church people and how she had the cunning to plan and execute some of these outlandish crimes.

By the end of the book, the whole thing felt a little bit like a made-for-tv-movie. Which is too bad, as there was potential there at the beginning.