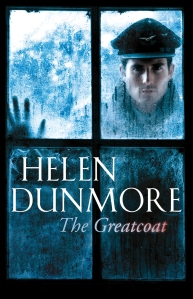 I am a Helen Dunmore fan, no doubt about it. Although her novels aren’t especially propulsive, I still find her work compulsively readable. She is particularly gifted when it comes to creating believable and sympathetic characters and her novels are moody and atmospheric. Her latest novel, The Greatcoat, caught my eye in the horror section – of all places.

Isabel Carey is a young bride who has moved to Yorkshire with her husband, Philip, a doctor.  They’ve been married just two months and this move to Kirby Minster is isolating: it’s a small town where they are clearly outsiders, Isabel is somewhat socially awkward and “bookish” and although she considers finding some work, Philip doesn’t think it would be acceptable for the wife of the town’s newest doctor to be employed. It is 1952. Although the war is over, both Isabel and Philip “had been children of wartime and all they asked of food was that it should fill them up.”  Good thing: Isabel is a terrible cook and food is still scarce and often unpalatable. Isabel is clearly out of her depth. She is “a little girl pretending to be her mother.”

Isabel and her husband take a flat in the home of Mrs. Atkinson, a woman Isabel dislikes on sight.  The flat is cold and grey and their landlady is constantly pacing the floor over their head. There is something decidedly menacing about her.

One particularly cold night, Isabel roots around in a closet looking for something extra to put on the bed and discovers an old greatcoat.

It was a coat. An RAF   officer’s greatcoat, she saw at once, recognising it with a thud of memory. There was the heavy, slatey grey-blue  wool, the buttons, the belt with its heavy brass buckle. It had been folded up a long time, she thought.

The coat does provide warmth, but it also brings a visitor. A man comes to her window:

She saw the pallor of his face first, as it seemed to bob against the glass, too high up to belong to a man who had his feet on the ground. The street lamp lit him from the side, throwing the sharp shadow of his cap over his face. He was too close, inside the railings that separated the house from the pavement. Of course, the level of the ground there was higher than the level of the floor inside. That was why he seemed to float in middair. A man in a greatcoat.

From this point in the novel, Dunmore elegantly weaves past and present as Isabel succombs to loneliness and the thrall of the past.

The Greatcoat was published under the Hammer banner (horror aficianados will recognize Hammer as the British production company behind  films like The Woman in Black and Let Me In.  They’ve entered the world of publishing in partnership with Arrow, a subsidiary of Random House. It’s nice to read a “horror” story that is less about blood and guts and more about the kind of chills which prickle your skin and send a shiver up your back. There are no mosters here, but The Greatcoat is deliciously creepy nonetheless.

AT HOME: We Are All Completely Beside Ourselves – Karen Joy Fowler