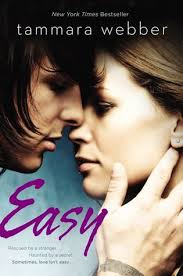 Easy was easy to love. So easy, in fact, that I started it and finished it in pretty much one sitting – abandoning all else yesterday after I got home from school and fed my kids –  reading until I’d turned the last page…about midnight. This novel by Tammara Webber hit all my guilty-pleasure buttons and a few others besides.

I think Easy is one of those novels that belongs in this New Adult category I see everyone talking about.  I actually wish we didn’t spend so much time shelving books into these categories  but, anyway, I can see how this book just crosses over the line from YA. For those of you unclear about the New Adult designation, Goodreads defines it as ” fiction [that] bridges the gap between Young Adult and Adult genres. It typically features protagonists between the ages of 18 and 26.” I also think that New Adult is a little more forthcoming with details of a sexual nature. (I should also add that at Indigo, this book is filed in the Adult section.)

Okay, so now that we’re all on the same page with regards to New Adult, let’s get to the good stuff.

Easy is narrated by Jacqueline Wallace,  a sophomore (for Canadians who don’t know what that means because we don’t use those terms it’s 2nd year) at an unnamed university. She’s there because she followed her high school sweetheart, Kennedy.  He’s just dumped her. She’s heartbroken. But that’s not how Easy starts.  It starts with Jacqueline leaving a frat party and getting jumped by someone she knows and always considered benign. Buck has other things on his mind, though, and the relatively graphic nature of the attack is an early indication that we’re leaving strictly teen fiction behind.

Jaqueline has a knight in shining armour, though. The stranger, Lucas,  pulls Buck off Jaqueline before he actually rapes her and beats the crap out of  him. After Jaqueline declines a trip to the hospital or police station, he whisks her to her dorm and safety.  I pretty much fell in love with Lucas from this moment on.

I stared back into his clear eyes. I couldn’t tell their color in the dim light, but they contrasted compellingly with his dark hair. His voice was softer, less hostile. “Do you live on campus? Let me drive you. I can walk back over here and get my ride after.”

Easy is a lot of things, but what it isn’t is the clichéd bad boy, good girl story we’ve all read a thousand times. Yes, Lucas has a pierced lip and lots of tattoos and a body to die for (I wish Ms. Webber’s editor had told her it was biceps not bicep though – even when referring to one) but anyway – that’s beside the point. He’s HOT. Smokin’ hot. And smart. And kind. And mysterious. And tragic. And sometimes, when he speaks, there was swooning – and I’m not just talking about Jaqueline’s reaction.

There’s more than just a love story going on in this novel. To Ms. Webber’s credit she’s created several other compelling minor characters including Jaqueline’s roommate bestie, Erin, and, Benji,  a boy in Jacqueline’s Economics class. The book offers lessons about personal safety and girl power without being didactic. In addition, there’s enough push/pull between Jaqueline and Lucas to sustain Easy through its 310 pages and I never once found myself screaming “just get on with it.”  If Lucas sounds just a tad too mature for his age – his childhood experiences will explain all. He’s a keeper and Jacqueline deserves him.

Will it go in my classroom library?  Yep. I can think of a dozen girls who will love it as much as I did.