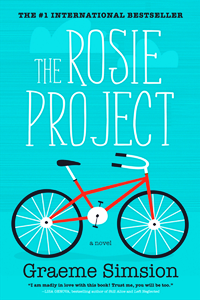 It’s easy to see why Graeme Simsion’s debut novel The Rosie Project was such a huge hit with readers all over the world. It’s one of those books with easy to like characters, a straightforward story and just enough quirk to make it stand out from the pack.

Don Tillman is a scientist in the Genetics department at an unnamed university in Melbourne, Australia. It’s clear from the book’s opening pages that while Don clearly has a super-sized brain, he also has some issues which have prevented him, thus far, from finding a suitable partner. Thus, the Wife Project.

Don’s two friends Gene and Claudia try to help with Don’s project, but Don felt their assistance was lacking. Their approach “was based on the traditional dating paradigm, which I had previously abandoned on the basis that the probability of success did not justify the effort and negative experiences.”  He eventually writes a sixteen-page questionnaire that he hopes will sort the wheat from the chaff.

Don describes everyone he meets by telling us their Body Mass Index and by the time he tells us that he is “thirty-nine years old, tall, fit and intelligent, with a relatively high status and above-average income” and that he should be “attractive to a wide variety of women. In the animal kingdom, I would succeed in reproducing” we know for sure that Don is somewhere on the Autism spectrum.

According to Autism Canada

Autism Spectrum Disorder (ASD) is a complex neurobiological condition that can affect the normal function of the gastrointestinal, immune, hepatic, endocrine and nervous systems. It impacts normal brain development leaving most individuals with communication problems, difficulty with typical social interactions and a tendency to repeat specific patterns of behaviour. There is also a markedly restricted repertoire of activity and interests. Individuals on the autism spectrum tend to have varying degrees and combinations of symptoms

All things considered, Don does pretty well in the world. Where he struggles is with human interaction. So when Rosie blows into his life, ostensibly looking for someone to help her discover the identity of her biological father, Don’s ordered world is thrown completely off-kilter. That’s when the fun really starts.

There are several laugh-out-loud moments in The Rosie Project, and it is fun to watch socially challenged Don and prickly Rosie work their way towards each other. It’ll make a great movie.

One thought on “The Rosie Project – Graeme Simsion”