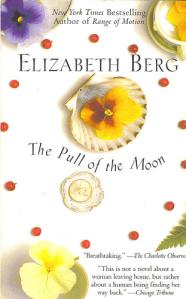 Nan is fifty. One day she wakes up and just decides to leave. Her daughter, Ruthie, is grown and gone; her husband, Martin, remains at home receiving the letters Nan writes to him from the road. In the first she tells him

I just wanted you to know I was safe. But I shouldn’t have said I’d be back in a day or two. I won’t be back for awhile. I’m on a trip. I needed all of a sudden to go, without saying where, because I don’t know where. I know this is not like me. I know that. But please believe me, I am safe and I am not crazy, I felt like if I didn’t do this I wouldn’t be safe and I would be crazy.

Elizabeth Berg’s novel The Pull of the Moon is one of those novels that book clubs (whose members are of a certain age) will have a field day over. And I would be the dissenting voice. (I usually am.) It’s not because I don’t get it, it’s just because I didn’t wholly believe it.

So Nan (who has enough money at her disposal that she can just take the car and wander off and stop whenever and wherever she wants – and there’s the first fly in this self-discovery ointment; it’s Eat, Pray, Love for the middle-aged set) has had it with her suburban life. But it’s not even that so much as that she no longer recognizes the woman she’s become. All her dreams and aspirations have buckled under the weight of being a mother and wife and now she wonders “who in the hell am I?”

This question is likely something most women of a certain age can understand because many of us chuck our own desires under the bus when the kids come along. Nan takes this opportunity to examine who she was and who she is and what she wants going forward. She writes letters to Martin and also writes in a journal, something she hasn’t done since she was eleven.

She meanders along back roads, stopping for food and rest and pondering the sorry state of her life. She also randomly befriends people: the waiter in the diner where she gets breakfast, a hitchhiker she picks up, a man mourning the loss of his wife, an old woman shelling peas. These interactions weren’t all that believable to me because Berg expects the reader to believe that a simple question will open everyone’s floodgates. Suspicion quickly gives way to confession.

Strangely, despite the fact that I didn’t really buy the characters Nan meets (or the short time she spends with them) I did empathize with Nan.  Maybe that’s because, although my kids aren’t yet grown and gone and I no longer have a ‘Martin’, I am 53. I am way past the mid-way point of my life and although I try not to spend my life wallowing in regret, I do wish I had done some things a little differently. I also desperately wish I could call someone up and say, “I want and new house and this is what it’s going to look like. As soon as I get back from this roadtrip, we’re building that puppy. You got that buster?” (Seriously, Nan writes to Martin that she wants a new house!)

Nan writes in her journal that when she was twelve her life “was like a wild, beating thing, exotic, capable of unfolding and enlarging itself, pulling itself higher and higher like a kite loved by the wind.”  The best thing about The Pull of the Moon is Nan’s attempt to recapture the essence of that feeling, life’s enormous possibilities which have long been buried under the weight of the expectations of others. When she does that, Nan’s journey is one worth taking.