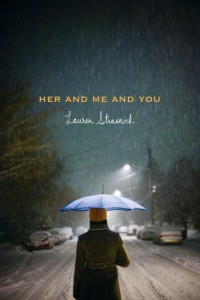 Alex and her mom have moved to Meadow Marsh to live in Alex’s dead grandmother’s house because “my favourite parent, Dad, had done some very bad things with a paralegal named Caroline.”

Faster than you can say trouble, with a capital T, Alex meets Fred and his twin sister, Adina. They’re  –  odd. Well, at least Adina is, but Alex is drawn to them anyway. Mostly she’s looking for an escape from the wreckage of her parents’ marriage and her mother’s subsequent nosedive into a bottle.

There’s not a lot of plot here – nothing much happens – but the triangle between Alex, Fred and Adina is almost immediately fraught with a weird and buzzing tension that Alex can’t quite get a handle on. One minute Adina is her bestie, the next she’s icing Alex out. To further complicate matters, Alex finds herself drawn to Fred, “his freckled face made [her] want to bake a batch of cookies. Down a gallon of milk.”

There’s also the problem of what Alex has left behind: her best friend, Evie, for starters has fallen in love and Alex felt “furious” about it. “Everything had changed so fast. Dad. Mom. Evie. Especially Evie.”

Her and Me and You is a relatively light-weight coming-of-age novel that is just better than average because despite the fact  that it has many of the standard YA realistic fiction hallmarks: divorced parents, absent parents, eating disorders, underage drinking, high school drama, it also has a compelling protagonist. Alex doubts herself in the way of all teenage girls, but she also has a wonderful capacity for growth and forgiveness. I liked that about her.

Her and Me and You is a strangely compelling YA novel and I think it mostly has to do with how it navigates the tricky world of teenage relationships.