I think it’s probably un-Canadian not to like Martin Short. He (and his alter egos) has been
making me laugh for at least 30 years, so I was really looking forward to reading his memoir I Must Say. Just the title  alone conjures up an image of Ed Grimley, the horn-haired, high-waisted-pant wearing, triangle-playing nerd who coined the phrase.

Short was born in Hamilton, Ontario, the youngest of five. His father,  Charles, an 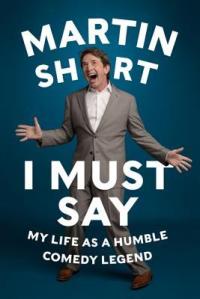 executive at the steel plant, and his mother, Olive, a classically trained violinist created a family environment that nurtured  his offbeat creativity from an early age.

Outside, on Whitton Road, normal Canadian childhoods were taking place, with kids playing hockey in the streets until darkness fell and the streetlights came on. Inside, little Marty was snapping his fingers and  singing, “Weather-wise, it’s such a cuckoo- daaay!”

Despite his artistic leanings, Short hadn’t planned on a career in show business and he credits Eugene Levy with encouraging him to try out for a Toronto-based production of Godspell. It was 1972 and Short had just graduated from McMaster University. His intention was to do social work, but he said he’d give the acting thing a year. We all know how that turned out.

I Must Say is a chatty, name-dropping memoir that is both fun to read (mostly because you’ll know virtually every single name Short drops; it’s a veritable who’s who of Canadian comedy royalty) and also illuminating. Short makes us laugh – well, he makes me laugh at any rate – but his life has not been without its tragedies. He lost his older and much admired brother, David, when he was just twelve. He was young when both his parents died. And I read about the death of his wife of 36 years, Nancy, with a lump in my throat.

Other bits of the book are laugh-out-loud funny, especially when you are familiar with Short’s iconic characters including Lawrence Orbach, Franck from Father of the Bride  and my personal favourite, the ill-prepared, self-important, overweight celebrity interviewer, Jiminy Glick. I could watch Jiminy interview celebs for hours and pee my pants laughing every single time.

I don’t read a lot of memoirs and certainly don’t care that much about the cult of celebrity
to read those written by the rich and famous, but Short gets a pass because I have loved him for many years. Whenever I need a pick-me-up, he’s my go-to guy. I was happy to ‘read’ that despite his Rolodex of famous friends he’s a pretty down-to-earth guy – a creative, smart and self-deprecating man who often had painful bouts of self-doubt. If you have any love for SCTV, SNL or The Three Amigos, I Must Say is an enjoyable way to spend a handful of hours.

2 thoughts on “I Must Say – Martin Short”