A few years back, my bookclub read Riel Nason’s debut novel The Town That Drowned and we all fell in love with Ruby and her younger brother, Percy, inhabitants of a little town called Haventon. Nason’s story drew from actual events: the area was flooded after a dam was built. Anyone who lives in New Brunswick, Canada, where Nason’s story is set, will be familiar with the landscape and many of the place names, even if they don’t quite remember the flood that drowned the town.

All The Things We Leave Behind revisits the Saint John River Valley, this time a fictional town called Riverbend, circa 1977. On this occasion, our narrator, seventeen-year-old Violet, is taking care of the family business while her parents are on a road trip looking for her older brother, Bliss, who disappeared just after his graduation from high school.

The book starts ominously enough as Violet recalls the “boneyard deep in the woods.” She and Bliss discovered the place when they were kids even though “the boneyard’s location is supposed to be secret.  This is the final resting place for the moose and deer that have killed up and down the Trans Canada 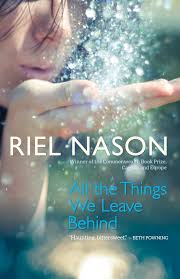 Highway.   When Violet recalls the time she and Bliss had stumbled upon the boneyard, aged nine, she also recalls how Bliss had tried to protect her from the gruesome sight. He assures her they’re never going back, but he also tells her “we can’t let it wreck the whole forest for us.”

Nason weaves Violet’s recollections of her brother into a narrative which is mostly concerned with Violet’s summer-time responsibilities, tending The Purple Barn, her family’s roadside antique store, literally  “an enormous rectangle, a hundred-foot-long-barn, painted purple.”  Violet isn’t too young for the gig

I know what I’m doing and I’m almost an expert on antiques from hanging around the store and listening to my father my whole life. I can rattle off statements like, “It’s a late Victorian, Eastlake period piece, factory made, ash not oak, but excellent quality.”

Violet takes her job seriously, but she is also prone to melancholy and introspection. She is not exactly a typical teenager; she is certainly not partying her way through the summer despite the fact the she is sharing a cabin at Seven Birches Campground and Cabins with her best friend, Jill,  and despite the fact that she promised Jill she’d try to have a fun summer.

All the Things We Leave Behind is a quiet novel of growing up and letting go – even when you don’t really want to do either. Nason adeptly evokes a specific time and place, but the novel’s themes are universal in scope. Even though I didn’t quite settle into the book’s rhythms in quite the same way as I settled into The Town That Drowned and even though I wasn’t totally satisfied with some of the denouement’s machinations, I would still recommend All The Things We Leave Behind because Nason’s prose is consistently good and the novel has many charms.