Back in the 80s, I had tickets to see Billy Idol at Madison Square Garden. A guy I was dating at the time had scored the tickets for my birthday and I was so excited because, hello, Billy freakin’ Idol. Alas, it was not to be. As I recall, there was some sort of issue with asbestos or something and the concert was cancelled.

“White Wedding” was one of the very first videos I ever remember watching. Canada’s version of MTV, MuchMusic launched in 1984 and Idol’s song came out in 1982. I think Idol was one of the first video stars ever because he’s so pretty. (And I don’t mean to imply that was the only reason he was a huge video hit – there’s no denying Idol’s charisma or talent.)  He made a lot of videos in the 80s and was a huge star, so I was really sad that I didn’t get a chance to see him live.

Of course, I didn’t really know much about Idol and although I am not in the habit of reading rock star memoirs, I kind of had to read Dancing With Myself. Idol wrote the book himself and his straight-ahead style serves his story well. 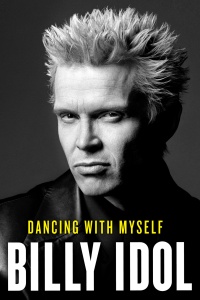 Billy Idol was born William Broad in 1955 in North London. When he was four, he and his parents moved to Long Island, NY where he lived until he was eight and the Broads returned to the UK. At that point, Idol considered himself an American and so often felt like a fish out of water.

“Music always pulled me through,” he said, “voices laying out a tale of their lives, musicians riding the wave.” He was also a voracious reader, reading everything from Enid Blyton to every history book he could get his hands on. Like lots of other smart kids, school wasn’t his bag and although he did one year of college, he dropped out. Still, Idol and his younger sister, Jane, enjoyed a happy, middle-class life with parents who loved and supported him – even when they didn’t always understand him.

But the times, they were a changin’. In 1976, Idol saw The Sex Pistols play for the first time.

On that night, the Pistols onstage were unlike anything we’d ever seen before. Johnny Rotten, with orange, razor-cropped hair, was hunched over, holding a beer and staring bug-eyed out at the crowd through tiny, tinted square glasses….While hardly moving, John radiated a defiant intensity that demanded your attention….It made a strong impression on me.

The punk scene blossomed out of what was happening in England at the time. “In mid-’70s England, you couldn’t get a shit job, let alone have a career,” Idol recalls. The punk movement was part political statement and part fashion statement and Idol was in the right place at the right time. The punk scene was “a reaction to everyone who was telling people our age what we should do to succeed.”

I don’t think even I realized how connected to the British punk scene Idol was. His first band, Generation x actually experienced some success and launched Idol’s successful solo career.

When things began to disintegrate with Gen X, and Idol no longer felt there was a future in punk, he decided to go the States and the rest, as they say, is history.

Dancing With Myself is filled with the requisite name-dropping and behind-the-scenes stuff relating to the music business, but mostly it’s a straight up tale of sex, drugs and rock ‘n’ roll. Idol is very candid about his drug use – which was copious and scary, really. He also had more than his fair share of sexual encounters. The love of his life, Perri Lister, a dancer he met during his punk days and the mother of his son, Willem, is clearly an important person in his life although they haven’t been together in years. Idol also has a daughter, Bonnie, from another relationship.

I enjoyed reading this book, actually. I am not a music aficionado by any stretch and so the music biz stuff would likely be more interesting to someone who is plugged into that. I was interested in Idol the man, though. The guy trying to make good choices for his kids; the son who cared for his dying father; the big brother and uncle; the friend. Idol probably shouldn’t have made it through all those crazy drug-filled days, or survived the horrific motorcycle accident he had in 1990. But he did. His memoir proves his resilience and his relevance and although not always a nice guy, he owns his mistakes and that makes him pretty awesome in my book.