I am surrounded by teenagers every day and their world seems difficult to me, more 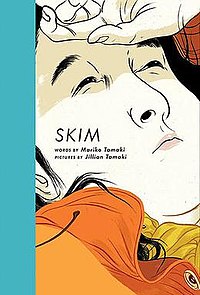 difficult than I remember my adolescence. There was no social media back then. We hung out, gathering at someone’s house on Friday night to play Trivial Pursuits and drink Pop Shoppe soda. We had dances where you’d just pray not to be asked to slow dance with some geeky guy, especially for the last dance, which was always “Stairway to Heaven” – longest song on the planet. My locker was covered with pictures of Robby Benson. The drama happened in the girls’ bathroom and the bullying happened in person. We talked for hours on the phone…which was in the kitchen, so your end of the conversation could be heard by pesky brothers and eavesdropping moms.

It’s always interesting to read about young people because even though I feel so far removed from those years (my 40th high school reunion happens this summer!), their lives are fascinating to me. A really good YA novel can capture the essence of what it is to be young and send me spinning back to my own fraught teenage years.

Skim, the award-winning graphic novel by the cousin team of Mariko Tamaki (writer) and Jillian Tamaki (illustrator), unspools the life of sixteen-year-old Kimberly Keiko Cameron aka Skim as she navigates friendships, crushes, school, suicide and depression. Like with their graphic novel This One Summer, the Tamakis zero in on what it is to be young and to cope with all the shit life often throws at you.

Skim’s parents are divorced. She’s interested in wicca and tarot cards and her English and drama teacher, Mrs. Archer, who is “always saying weird stuff like – I’m telling you girls. You might think different, but chocolate is better than sex.” Skim relates to Mrs. Archer because she considers herself a bit of a freak, too.

The simple black and white illustrations capture the essence of high school life; the constant navigating and negotiating that comes with being a young person. Skim is thoughtful and fragile, but there is a toughness to her that allows the reader to believe that she will survive. 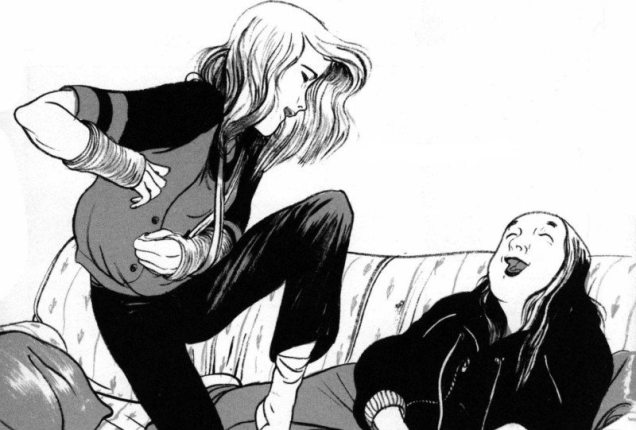 You couldn’t pay me money to be a teenager. All those hormones. All that heartache. Still, there is something about this period in your life that is pretty amazing. All that potential. All those feelings so close to the surface. Skim manages to capture that beautifully and Skim’s story will resonate with anyone…well, anyone. Because we were all young once and if you are young now – then at least part of Skim’s story is your story, too.