I have a confession to make. I am a fangirl.

At first it was just me and my Tigerbeat magazines. Posters on my bedroom wall. The usual suspects – given my age: David Cassidy. Robby Benson. Richard Gere. Around the time my son was born, I discovered Buffy the Vampire Slayer and that was a game changer. I just happened to catch the end of season three, that moment when Buffy and Angel stare at each other across the smoking ruins of Sunnydale High and I was all Who is that?  This was before PVRs. I rented the previous seasons of Buffy at Blockbuster and when the new season started I was ready. Then I discovered fanfiction. Well, fandom in general. I met amazing people. I attended conventions in Las Vegas and Atlanta. For about a decade I was all-in. Then, of course, life gets busier and the shows ended and I sort of drifted away from fandom. 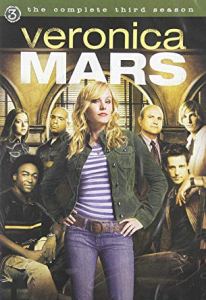 Flash forward a decade or so and at the encouragement of one of my friends from the Buffy fandom, I started watching Veronica Mars. Veronica Mars (2004 – 2007) is of roughly the same vintage as Buffy (1997- 2004) and in fact several Buffy actors appear on Veronica Mars including Allison Hannigan, Charisma Carpenter and Buffy creator Joss Whedon. I watched the first three seasons of Veronica Mars in about ten days. Then I rented the movie, which I watched three times. I knew season 4 was due to be released tomorrow, and my intention was to watch the series straight through again before then, but the new series dropped a week early. I am two episodes away from finishing season 4 and managed to remain spoiler free until I inadvertently saw something which literally made me feel ill. I am sick with anticipation. (I have now seen the entire eight episodes and I am shaking my fist at you Rob Thomas!)

So, what’s a fangirl to do? First stop Archive of Our Own. That’s really the premiere site for all your fanfiction needs. It used to be Fanfiction. net before they got all uptight about smut. I’ve been out of the fic game for so long and so in order to expedite the process (aka avoid reading junk) I asked my Buffy friends for some names. Someone recommended giving the Veronica Mars books a go. Wait? There are books? And sure enough, there are.

Veronica Mars, when the series opens, is a seventeen-year-old high school student who lives with her dad, Keith, in Neptune, California, a sort of seedy beach town near San Diego. The town is divided by wealth. There’s the very, very rich, those who live in the ’09 zip code (known as 09ers) and then there’s everyone else. When the series opens, Veronica is on the outside looking in. Once, she’d been part of the rich crowd because she was dating Duncan Kane, son of the richest guy in Neptune. Veronica’s best friend was Lilly Kane, Duncan’s sister. She had a little extra cache because her father was the town sheriff. When the series begins, though, Lilly has been murdered. Keith, for accusing Mr. Kane of playing a part in his daughter’s death, has been run out of office, and no one is speaking to Veronica.  The series is populated with fantastic characters. There’s Eli ‘Weevil’ Navarro, leader of Neptune’s notorious PCH  bike gang; Wallace Fennel, a new kid who becomes Veronica’s bestie; Cindy “Mac” Mackenzie, a computer whiz, Dick Casablancas, a rich, entitled surf rat and Logan Echolls, son of movie star Aaron Echolls and Lilly’s boyfriend.

Over the course of three seasons, friendships are tested, alliances made and broken, and mysteries solved because that’s what Veronica does. Like her vampire-slaying contemporary, Buffy, Veronica is smart and fearless and tenacious. Like Buffy, she has to juggle her own personal life with her driving need to get to the truth of things, even if the truth often puts her in harm’s way. Like Buffy, she’s just a girl.

The show was created by Rob Thomas (not Matchbox 20‘s Rob Thomas) and it is whip-smart, filled with witty writing, heartache, laugh-out-loud zingers and clever mysteries. The acting is stellar, particularly Kristen Bell as Veronica. I loved the show. Well, loved might be an understatement.

The movie, funded by a kickstarter project  came out in 2014 and takes place about nine years after the series ended. I won’t spoil anything, but it’s a must-watch if you are going to watch season 4.

The two Veronica Mars novels take place after the end of the movie and so while they probably aren’t necessary I loved them. Rob Thomas considers them 98% canon and as he wrote them, along with Jennifer Graham, I think they are really must-reads for any fan of the show.

The first, The Thousand Dollar Tan Line, is the story of a girl who goes missing during Neptune’s notorious spring break. Veronica is called upon to investigate and she is soon plunged into a dangerous world of drug cartels and organized crime. When a second girl goes missing, things become even more complicated because it brings someone from Veronica’s past back into her life.

The second book, Mr. Kiss and Tell, is the story of a girl, the younger sister of one of Veronica’s high school classmates, who is found badly beaten in a field. She identifies someone who worked at the Neptune Grand as the assailant, but that man has fled the country because he was in the US illegally. The victim is trying to sue the hotel for damages and Veronica has been hired by the hotel to disprove the victim’s claims. Of course, like with every single Mars investigation, things are not as they seem.

If you had no prior knowledge of the show, I think you could still enjoy these two books as straight up mysteries. There are the requisite red herrings, clues, action – all the stuff mystery fans would like. But for fans of the show there’s going to be a little extra something something.

And really, if you haven’t watched Veronica Mars you are in for a real treat. I haven’t fangirl squee’d like this in years. (But I am still shaking my fist, Rob!)