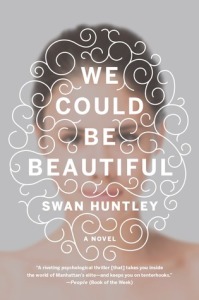 Catherine West wants a family – which is sort of funny once you get to know her. The narrator of Swan Huntley’s novel We Could Be Beautiful  is vain, spoiled and selfish. It’s hard to imagine  she’d ever be selfless enough to have kids. Plus, she’s pushing the biological envelope: Catherine’s 43.

She thinks she has everything it would take to be a mother, but when she categorizes her success, it feels like having a baby would be just one more accessory.

I was rich, I owned a small business,  I had a wardrobe I replaced all the time. I was tones enough and pretty enough. I moisturized,  I worked out. I looked younger than my age. I had been to all the countries I wanted to see. I collected art and filled my West  Village apartment with it. My home was bright and tastefully bare and worthy of a spread in a magazine.

The only problem is that Catherine’s single. She’s had lots of boyfriends (and a girlfriend), and two broken engagements, but now she’s alone. Her most significant relationship is with Dan, the massage therapist who comes to her house to rub her neurosis away.

Then she meets William Stockton, a “stunning, square-jawed man with gentle eyes and elegant gray hair, full and parted to the side.” There’s something familiar about him, and as it turns out William’s parents and Catherine’s parents used to be great friends. Catherine is several years younger than William, so her memories of him are vague.

Almost immediately, Catherine is smitten and too-good-to-be-true William is moving in. On paper, he seems like a great guy (he’s educated, has a good job in banking, he’s charming and attentive), but readers will clue in that there’s something not quite right. Catherine isn’t so swift on the uptake.

We Could Be Beautiful is billed as a thriller, and it certainly reads like one.  I mean, you’ll certainly figure out pretty quickly that William is up to something, even if you’re not sure what it is. When Catherine mentions William to her mother, who is suffering from dementia, Mrs. West’s reaction is visceral. Then Catherine finds a box of old ephemera, including a letter from a long-ago nanny which alludes to some event that she hadn’t protected Catherine from.

Probably the more interesting aspect of this book, though,  is Catherine’s journey. I found her vapid at the beginning of the book. She doesn’t need to work because her father left her and her sister a pile of money. She owns the West Village house she lives in. She owns a little store called Leaf, which sells – tellingly – beautiful art cards, with nothing printed inside. Her one friend, Susan, is as superficial as she is. She has a strained relationship with her only sibling, Caroline. On the surface it’s a beautiful life, sure, but it’s style over substance. Her relationship with William forces Catherine to do some recalibrating, and that’s interesting to watch.

I enjoyed this book. It’s well-written, the pages turn themselves, and even if it’s less ‘thriller’ and more ‘drama’, it’s still entertaining.