Jessie and Carl have been married for many years, happy years from the sounds of things. They are spending some time at their isolated cottage in the woods in Maine. Their lives together have fallen into a rhythm that will be recognizable to most people; they have a shorthand. But things for the pair are about to become complicated.

Cynthia Thayer’s novel A Brief Lunacy examines the fault lines in a marriage. 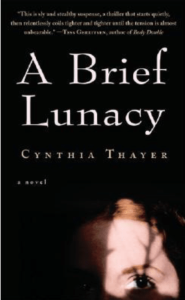 Sometimes those cracks don’t appear until something remarkable happens and the catalyst in this novel is the arrival of  Jonah, a mysterious young man who turns up at their cottage, claiming to have had all his camping gear stolen. Carl insists Jonah head up the road to the highway, but Jonah finagles his way into a dinner invitation and crashing on the couch for the night. In the morning, all hell breaks loose.

It turns out that Jonah isn’t exactly who he says he is. In fact, he’s Jessie and Carl’s daughter Sylvie’s boyfriend. Earlier that day, they’d received a call from the care facility where Sylvia has been living as a psychiatric patient to inform them that she’d gone missing. Jonah’s arrival is no coincidence. He’s come to get to know Carl and Jessie and his arrival forces them to reveal things about themselves to each other that they never expected to divulge. Carl, in particular, has been harbouring a dark secret for decades.

Despite the fact that I found the way that Carl and Jessie spoke to each other rather stilted, I still found A Brief Lunacy a compelling book. The whole encounter between the couple and Jonah lasts under 24 hours, but it’s pretty intense. Bad things happen. Jonah, it won’t take readers long to figure out, is completely unhinged.

A Brief Lunacy has lots to say about survival and what we are willing to do to save ourselves and those we love.