High school junior Ellery has a plan. The plan involves a gun. Nothing is going to stop 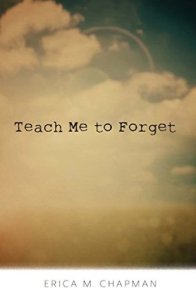 her. The money she’s saved for a trip to Paris will instead pay for her funeral. She’s already booked cleaners to come in the day after. This is the scenario in Erica M. Chapman’s YA novel Teach Me To Forget.

There are, she understands, a couple flaws in her plan. Her bestie Jackson is one of them.

Jackson will hurt. We’ve been best friends since he climbed my tree and broke his leg in second grade. He’ll get over it. He’ll find another friend. Someone who deserves him more than me.

Her mother is another one; “…there’s a sadness in her eyes” that Ellery feels responsible for. And then there’s Colter Sawyer, the high school senior who just happens to be working at the K-Mart when she tries to return the gun (which turns out to be defective).

Colter is in Ellery’s AP English class, but the two are not friends. He is immediately suspicious of Ellery telling her “There’s no way anyone sold that gun to you.” Colter recognizes in Ellery something he has seen before and he makes it his mission to “save” her.

I don’t really know how to feel about this book. On the one hand, it highlights the helplessness and hopelessness of a suicidal person. It also tries to illustrate the importance of having people in your life, connections that you can count on. There are moments of surprising humour and the relationship between Jackson and Ellery is lovely. Jackson was my favourite character, but as things heat up between Ellery and Colter, he seems to drop off the page.

There was also something sort of shrill about it the book, though. Ellery was constantly screaming and running away from situations. I get that she is unwell and I had a great deal of sympathy for her. I also wondered why her mother, a nurse of all things, didn’t notice that her daughter seemed to be going off the rails. Yeah, I know, she was dealing with her own grief, but still. Not even a little bit suspicious? And then there’s Colter, whose own backstory, while tragic, makes him wayyyy too patient with Ellery. Given his circumstances, and knowing what he knows, you’d think he’d be a little bit more aggressive with getting Ellery professional help. “I love you” doesn’t necessarily save the day.

I appreciated what the book was attempting to do. It worked on some levels, but some of the characterization was a miss for me.