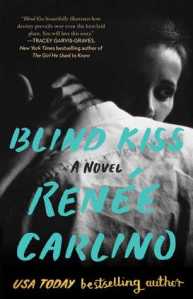 Oh dear. Renee Carlino is a USA Today bestselling author, whatever that means. It doesn’t mean much to me after reading Blind Kiss, which was an impulse buy for me and cringe-y on every level.

Penny is in her final year of college when she is railroaded into taking part in a psych experiment where she is blindfolded and made to kiss an absolute stranger.  This kiss made Penny feel as though she is going to “spontaneously combust” and that  even “If he was the ugliest guy in the world [she] would have still been attracted to him.” Of course, Gavin is not unattractive. “He was gorgeous, with warm green eyes and an angled jawline.”

Chemistry doesn’t lie and Penny and Gavin have chemistry up the ying yang, but Penny wants to focus on finishing her dance degree so she friend zones Gavin. Thus begins a ridiculous fourteen year “friendship” where Gavin dates a million other people and Penny marries the most boring dude on the planet. The best friends schtick is fooling no one, of course, but that doesn’t stop these two from denying their feelings over and over, and, quite frankly, acting like idiots for most of the book.

Look, I am all over a book where a couple – for whatever reasons including misplaced honour, or bad timing  – can’t seem to get their shit together. Serve me up a heaping helping of angst and I will fall to my knees, but Blind Kiss  didn’t have that.

These characters behave in ways that are wholly, well, frankly, ridiculous. For example, in the present, when Gavin tells Penny he’s moving to France she “screamed at the top of [her] lungs and then made a guttural sound as [she] hunched over and held [her] stomach.” They’re in a bar. She’s 35. I mean, is this the behaviour of a married mother of a teenager? It was at that point (page 6) that I felt like this story, which I felt might have promise – which is why I bought the book – went off the rails. Every interaction between Gavin and Penny is so over-the-top histrionic that it was hard to take any of it seriously.