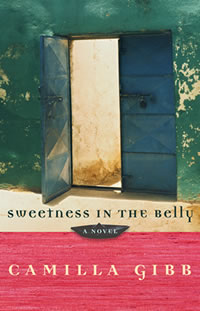 British born, Canadian raised writer Camilla Gibb’s stunning new novel Sweetness in the Belly divided my book club. I was among those who loved it. The book tells the story of Lilly, born to hippie parents and brought up, after their death, in the city of Harar as a Muslim. Her story is told by layering her young years in a politically charged Ethiopia with her life as a nurse in London. It’s a fascinating picture of a world torn apart by poverty and prejudice and by Lilly’s own beliefs. It is also a love story as we wait with Lilly to learn the fate of her lover, Aziz.

I know nothing of the politics of Ethiopia under Emperor Haile Selassie. I know very little about the Muslim religion, but Gibb’s beautiful prose and attention to detail (she conducted fieldwork in Ethiopia for her PhD in social anthropology) makes this book a page-turner. The characters are complex and interesting and the day to day struggles of the women, in particular, are riveting. I was both gutted and elated by book’s end.