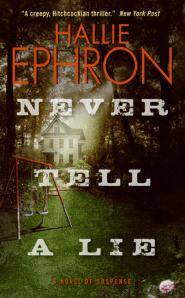 I guess I have been spoiled by Thomas H. Cook, who never fails to amaze me with his layered and intelligent mysteries. Hallie Ephron’s debut novel Never Tell A Lie, while not horrible, wasn’t all that the praise had promised.

Ivy and her handsome husband, David, are hosting a yard sale at their Victorian home. Ivy is hugely pregnant and she’s nesting like crazy, trying to rid the house of years of accumulated junk – most of which belonged to the previous owner. She is approached by a woman, Melinda, with whom she went to high school. Melinda used to play in Ivy and David’s house as a child and she asks if she can see it once more. David offers to give her a tour and Melinda disappears. Sounds pretty fishy, eh?

What follows is a by-the-numbers mystery where Ivy and David must fight to prove their innocence and everything is suspect. The plot unravels at a pretty quick pace but it’s a clunker. Puzzle pieces turn up relatively easily and lock into place without too much effort and even Ephron’ s attempts to toss the reader some plausible red herrings are only mildly diverting.

Ultimately a book like this depends on the reader’s investment in the character. Ivy isn’t unlikable; she actually manages quite well considering she’s nine months pregnant. She’s resilient and smart and figures out the mystery of Melinda’s disappearance quite handily.