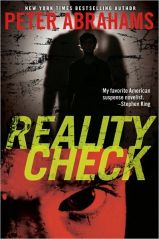 I loved Peter Abraham’s novel End of Story. It was fast paced and well-written and had a right-out-of-left-field curve ball that was suspense-thriller awesome. His YA thriller Reality Check doesn’t have quite the same punch, but young readers, particularly boys, will likely find this story fast-moving and quite exciting.

Seventeen-year-old Cody has it pretty good. He’s captain of the football team and he’s dating Clea,  the prettiest (and smartest) girl at his Colorado high school. His life’s not perfect, though. His mom died of cancer and his father tends to drink a little too much. Then Clea’s father decides his daughter needs to go to boarding school in Vermont – separating the teenagers. Things go from bad to worse when Cody does some serious damage to his knee and Clea suddenly disappears. Cody does the only thing that makes sense: he quits school, hops in his car and drives to Vermont to join in the search.

That’s the basic premise of Reality Check.  It has the requisite twists and turns, the shady characters who aren’t quite what they seem and just enough character development to keep the average reader invested.

Cody is central to the story. The third person narrative is limited to his perspective and that’s a good thing because Cody is likable. He’s tenacious and fearless, too. Because he knows Clea intimately, he’s not willing to accept the party line – that she’d somehow fallen off a horse and had somehow gotten lost in the woods. He keeps digging, looking for clues and then answers.

I suspect that many teens won’t figure out the mystery too early and that they will root for Cody and Clea’s reunion as I did. There is some language in the book, so it’s perhaps not for younger teens, but it’s an enjoyable book for those who like fast-paced page-turners.