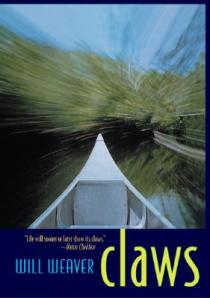 There’s something for everyone in Will Weaver’s YA novel, Claws, but that might have been part of the reason I didn’t love this book. Is Claws a family drama, a suspense thriller, an adventure novel?

Jed Berg is sixteen. He lives with his parents, Gary and Andrea, who are successful (a freelance house designer and lawyer respectively) and according to Jed, “the most successful couple [he] can think of.” Sometimes Gary even lets Jed drive his mint 1969 Camaro. Jed is a good student, a better- than – average tennis player and goes out with Cassie, a popular and pretty senior. Life is good. Until it’s not.

Weaver admits that he “set out to write an unremittingly sad novel.” Partial to a quote by Chekhov which states that “life will sooner or later show its claws,” Weaver endeavors to unravel Jed’s surprisingly uncomplicated teenage life. He says: “I essentially wrote the novel around that idea (of life tipping upside-down).”  (from the author’s website)

And Weaver isn’t lying. Crap starts heading towards Jed at a rapid rate starting with Gertrude, a surly pink-haired girl who has evidence that Jed’s father is having an affair with her mother. Unsure of how to handle this new information, Jed tries to figure out whether or not he has a clear picture of his parent’s marriage. But then, Weaver throws the reader another twist: Gertrude isn’t being exactly honest about her identity. And then when all the infidelity cards have been played, Jed finds his own life going off the rails in ways that are both realistic and, perhaps, slightly melodramatic.

I have to give Weaver props; I kept turning the pages. Jed was likeable and intelligent. His parents and older sisters were sketched in, though,  and so it wasn’t easy to see things from a perspective other than his, but I suppose that’s the point. When you’re a kid, you want to believe that your parents will always be together. I still remember sitting at the top of the stairs with my brother, Tom,  listening to my parents talk about divorce. I was twelve. That’s 40 years ago and I have the clearest memory of it.

I wish Weaver had found another way to show his claws at the end of the book, though. It felt slightly contrived to me, but I suspect that the climax will elicit the desired result from teenage readers. It’s certainly well-written and deserving of its place in my classroom library.