Greg Ruth has a successful career as a writer and comic book artist and has worked for Dark Horse Comics, DC/Vertigo and even illustrated Barack Obama’s picture book Our Enduring Spirit.

I saw The Lost Boy sitting on a shelf at Indigo and thought it looked and sounded interesting and as I am always on the hunt for graphic novels to add to my small but growing collection, I added it to my shopping bag.

The Lost Boy is the story of Nate who moves to a new town and a new house with his parents. His father tells him that he gets to choose any room he wants and upon a desultory inspection of the rooms upstairs Nate finds an old tape recorder under a loose floor board. Even more strange, there’s a note with his name on it which simply says: Find him.

The tape recorder belongs to Walter Pidgin and when Nate presses play he hears the voice of Walter, a boy about the same age as Nate.

“These are the facts,” Walter’s voice says. “Six dogs and three cats have gone missing in the past ten weeks. The pattern is too deliberate to be coyotes.”

Walter tells his tape recorder that something ‘unnatural’ is at work in Crow’s Woods and it turns out he’s right. 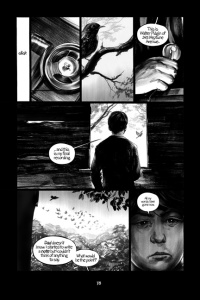 When Nate meets Tabitha, a girl down the street, she’s able to tell him that Walter went missing many years before and when the ‘otherworld’ starts encroaching on the real worl, Nate and Tabitha decide that they need to go into the woods to find out just what happened to Walter.

I found myself getting confused by the players – and maybe that’s because there’s this complicated world which is unveiled by talking dolls and bugs. Cool, but a perhaps too convoluted for one reading. I liked the art in The Lost Boy better than I liked the story, actually – although the story had a lot of potential.

Nevertheless, a worthy and intriguing additiong to my classroom library.