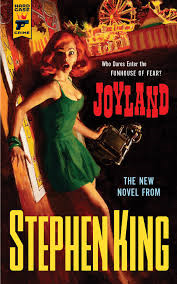 Although I devoured Stephen King as a teen and young adult, it’s probably been 15 years since I’ve read a King novel (Bag of Bones, which I loved). I decided to give Joyland a go and it was like settling into a comfortable pair of slippers. (I know, it’s ridiculous to compare the Master of Horror to a pair of comfy slippers, but I’m talking more about that feeling of just knowing that you are in really good hands – which you always are with King.)

Joyland is not a horror story really. It’s the story of Devin Jones, a college student who takes a job at Joyland, a Disney-style amusement park (I imagined Family Kingdom at Myrtle Beach, S.C., which I visited once as a teen) in North Carolina.  Devin tells the story of his summer and autumn at Joyland through the lens of late middle age. He says

That fall was the most beautiful of my life. Even forty years later I can say that. And I was never so unhappy. I can say that, too.

Devin’s unhappiness stems from his recent break-up with his first serious girlfriend, Wendy. Devin has an inkling that their relationship has run its course when Wendy doesn’t even hesitate to encourage him to take the job at Joyland, even though it means that they will be separated for the summer. “It’ll be an adventure” she tells him, without realizing just how much of an adventure it’ll actually be.

Devin meets a cast of interesting characters at Joyland and in the little seaside town he calls home while he works there. Characters like Lane Hardy (who shows him the ropes around the park) and Rosalind Gold (the resident fortune teller who makes a couple of astute predictions about Devin’s future) and Emmalina Shoplaw (who owns the boarding house where Devin rents a room and who tells him about the murder associated with Joyland’s  Horror House) add a bit of local character to the story.  Other characters, like Mike and his mother, Annie, have a more profound impact on Devin’s life.

Devin Jones calls that summer “the last year of my childhood” and he is right. King expertly balances the story’s nostalgic look back, and his protagonist’s bittersweet reminiscences (“I still want to know why I wasn’t good enough for Wendy Keegan”). Joyland is as much a coming-of-age tale as it is a murder-mystery. Both aspects of the novel will keep you turning the pages.