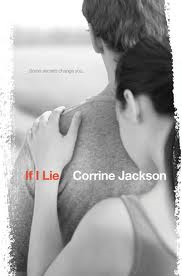 Quinn, Carey and Blake, the teenagers at the centre of Corrine Jackson’s debut novel If I Lie, seem ill-equipped to deal with the troubles life throws at them. Childhood friends, things begin to unravel in their senior year when Carey and Quinn break up (briefly)  and Quinn discovers she has feelings for Blake. All of this is complicated by the fact that they live in a military town and Carey has enlisted. When the novel opens, the story has already been set in motion and Carey is MIA. Quinn has been shunned by everyone, including her Lieutenant Colonel father because while she and Blake were sharing a private moment under the bleachers, someone snapped a picture and posted it on Facebook. Even though no one knew who the guy was, everyone knew Quinn was the girl.

If it seems complicated – it is. But, then, isn’t high school a complicated time? A time where you often like people who don’t like you back. A time where all your feelings sit like little bombs around your heart, ready to go off any second. A time where friendships splinter over silly things. A time of secrets. And Quinn is carrying around a big secret – one she promised she wouldn’t tell and although it makes her a target she sticks to her word.

If I Lie has a lot going for it – perhaps a little too much. Not only do we have what is happening between Carey, Quinn and Blake – but we also have Quinn’s complicated relationship with her father. Her mother left when Quinn was eleven. Well, she more than left actually; she ran off with her father’s brother – never to be heard from again. Until she shows up. There’s also Quinn’s relationship with George, a veteran she has been charged by her father to help; a punishment that turns out to benefit Quinn in ways too numerous to mention. Really, I think, Jackson was offering up a little lesson about war veterans here and I don’t mean to imply that it’s not a lesson worth learning. It just seemed one more element in an already overstuffed story.

Quinn’s voice is compelling, though. And I liked how the novel navigated her feelings for all the people in her life, without offering up any trite answers. Because if there’s one thing you learn in high school it’s that you don’t have all the answers and that relationships are complicated and the people you care about are worth fighting for.