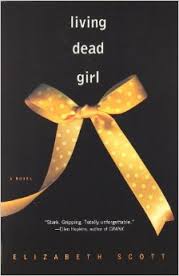 Elizabeth Scott’s 2008 YA novel Living Dead Girl garnered a lot of praise when it was published. Voted Best Book by the American Library Association, Voya Editor’s Choice and Teen Reads Best book in 2008, among others, Living Dead Girl seemed to be on everyone’s radar when it came out. In 2008 I was just returning to teaching after many years doing other stuff. I wasn’t reading a lot of teen fiction and I’d never heard of the book. Now that I am back in the classroom I spend a lot of time researching YA fiction in an effort to stock my classroom library with books that will appeal to my students. At just 170 pages, this riveting novel will certainly appeal to mature readers.

Alice was abducted by Ray just before her tenth birthday. For five years he has held her captive, physically, sexually and mentally abusing her.

Once upon a time, I did not live in Shady Pines.

Alice is fifteen now. She has been Ray’s prisoner for so long she no longer even dreams of escape even though she is left alone all day while Ray goes to work. She has been taught from a young age that if she does run away, Ray will return to Alice’s home and kill her parents. Even though Alice can barely remember the girl she was before, she know that she has no choice but to protect her parents. She knows what happened to the Alice before her.

…I keep waiting for Ray to tire of me. I am no longer short with dimpled knees and frightened eyes…I am 15 and stretched out, no more than 100 pounds. I can never weigh more than that. It keeps my breasts tiny, my hips narrow, my thighs the size Ray likes.

Half starved (she seems to live on yogurt), Alice’s days consist cleaning and watching soap operas as she waits for Ray to get home. Although the abuse is not described in detail, enough is alluded that readers will be left feeling very uncomfortable.

The thing is, you can get used to anything. You think you can’t, you want to die, but you don’t. You won’t. You just are.

Living Dead Girl is almost relentlessly grim, but it’s the kind of book that you just can’t put down. I doubt I will forget Alice anytime soon.