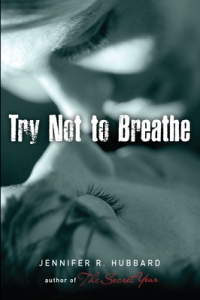 I think I am starting to suffer from YA fatigue. Or maybe it’s just that, despite its accolades, Jennifer Hubbard’s novel Try Not to Breathe, didn’t quite work for me. I don’t mean to imply that the novel isn’t decent or that it isn’t well-written, either. I can’t say for sure why it was that when  I got to the novel’s tidy ending,  I just felt sort of meh.

Ryan is 16 and has recently returned home from a stint at Patterson, a psychiatric hospital. Ryan attempted suicide and now “everyone snuck looks at me in the halls…Sometimes I was tempted to foam at the mouth and babble to invisible people, because the other kids seemed so disappointed that I didn’t. But I couldn’t be sure they would realize it was a joke. The few times I’d tried to make anyone laugh, all I got were nervous glances and squirming.”

Ryan’s circle is pretty small. He’s an only child; his father travels a lot and his mother works from home – to keep an eye on him. Everyone is pretty much on tenterhooks. His only freedom comes at the waterfall, where he stands under the punishing water “because [he] needed it.”

Into his world comes Nicki. She’s the younger sister of a guy he sort of knows from school. She shows up at the waterfall and the two form a friendship that soon becomes necessary to them both. Nicki isn’t afraid to ask Ryan questions, and soon Ryan discovers that he isn’t afraid to answer them. She has an agenda, as it turns out; her father committed suicide and she thinks, given the circumstances, Ryan might have some insider information.

The other important people in Ryan’s life are Val and Jake, two other teens he met during his stay at Patterson. He thinks he has feelings for Val, but a road trip orchestrated by Nicki (who is too young to drive, but does it anyway) delivers the heart-crushing news that Val is not as willing to take a chance on Ryan. It’s just one of the post-suicide-attempt blows Ryan is dealt, but he manages to rally.

Try Not to Breathe does a good job describing a teenager’s depression. Ryan had “lived behind what felt like a pane of glass, separated from the world.” Ryan is a likeable character, too, and so is Nicki. I found his parents less successful, sort of hovering non-entities. Despite my own reservations, I think the book will likely speak to teenagers who have ever considered suicide because, ultimately, Ryan’s is a story of survival.