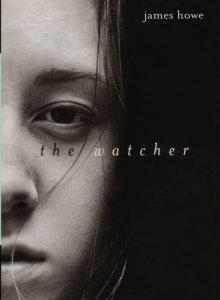 The Watcher was published in 1999 to much critical acclaim. James Howe is the well-known author of the over 90 juvenile and YA books including Bunnicula and The Misfits series. ( I read Totally Joe and was a big fan.)

There are three main characters in The Watcher: Chris, the golden-boy lifeguard, Evan, the fourteen-year-old on vacation with his younger sister and parents, and the girl who sits at the top of the steps leading down to the beach, watching.

The truth is, though, that they are all watching each other. For example, Chris notes that “he didn’t know how he knew she was watching only him and  not them. He could just feel it.” She’s watching him; he’s watching her.  Evan thought Chris was “the coolest guy on the beach” and secretly wished he could be just like him. The girl watched the families, “not pieces of families with only a mother or a nanny, but what she thought of as complete families with two parents and at least two children, preferably a girl and a boy.”

All three of these characters are on Fire Island, a popular beach resort near New York City. There is no reason to think they will ever cross paths, but they eventually do.

Howe is a straightforward wordsmith, and he creates compelling back stories for Chris and Evan. We know that Chris is at a crossroads, unsure of what to do now that he has graduated from high school. He feels the weight of his parents’ expectations, although we don’t understand exactly how much pressure he feels until much later in the book. As for Evan, he adores his little sister Callie and is doing his best to be a good big brother because he senses that there are things going on behind the scenes which might spell the end of his happy family.

As for the girl, we know nothing at all about her except that as she sits on the steps surveying the beach she is imagining a much different life for herself, one where she is a princess who has been separated from her true family.

I read The Watcher in one sitting. I can only imagine that when it was first published it would have caused quite a sensation. It’s easy to see why. Each of these characters is called upon to do something brave and Howe handles their stories without sensationalism or preaching. Young readers would certainly recognize themselves in these pages.

2 thoughts on “The Watcher – James Howe”