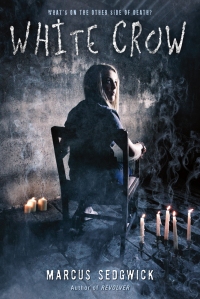 Marcus Sedgwick’s YA novel White Crow is not for the faint of heart, but careful readers will certainly be rewarded by this atmospheric tale. It’s a creepy story of science and obsession, of ghosts both real and imagined.

Rebecca and her policeman father move to Winterfold, a seacoast town in England. Like many other villages along Britain’s coast, Winterfold is slowly being eroded by the sea and what was once a bustling village of thousands of people is now “storm by storm, year by year” crumbling into the sea  and all that remains is “a triangle of three streets, a dozen houses, an inn, a church.”

Rebecca is none too happy about having to leave her more urban life for the much quieter Winterfold. She doesn’t quite know what to do with herself besides harbor resentment towards her father (who is, essentially, hiding out after some mishap at work) and pine for Adam, the boy who she left behind.

Then she meets Ferelith, a local girl who is, frankly, pretty strange. In fact, Rebecca notes she’s “the strangest-looking girl she’s ever seen.”

There’s something elfin about her. Everything ends in points: her nose, her eyes, her chin, her lips, her fingers, the spikes of her long tresses of black hair….her teeth, not quite a vampire’s, but not far short.

Rebecca and Ferelith don’t immediately gel, although it’s clear that Ferelith is smitten. Eventually, though, with nothing better to do, Rebecca starts to hang out with her a bit and Ferelith starts to reveal Winterfold’s somewhat sinister past.

That’s where the third narrator comes in.  Entries in a diary dated 1798, reveal the strange relationship between the writer, a Reverend, and a French doctor. The two men are fascinated with the prospect of discovering if there is life after death and their methods turn out to be – well – horrifying. He writes:

And so this young man has become our first subject, and though my hopes were high, the results were low.

I scorn myself to record it herein, but we learned nothing.

Not a single thing.

White Crow is like one of those old fashioned horror movies I used to watch when I was a kid. I could almost hear the menacing music as Ferelith tours Rebecca around Winterfold, through old, decaying ruins and to the one remaining church with the missing wall. When the novel reaches its climax, it’s creepy, page-turning fun. Young readers will have to pay attention; I know I did. But the book pays off in spades.