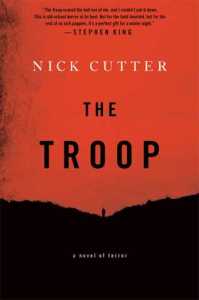 Nick Cutter is a pseudonym for Canadian writer Craig Davidson, author of Rust and Bone and Cataract City. I haven’t read anything by Davidson, but The Troop ended up on my reading radar because it was on pretty much everyone’s  radar when it was released in 2014. Even Stephen King, master of all things macabre claimed The Troop “scared the hell out of [him]…This is old-school horror at its best.”

Scoutmaster Tim Riggs takes his troop of five fourteen-year-olds (Kent, Ephraim, Max, Shelley and Newt)  to Falstaff Island, which is located fifteen miles off the northern coast of Prince Edward Island. (Trust me, there is not even a whiff of Anne Shirley here.)  It’s October and it’s time for the annual camping trip – something that Tim (who is also the local doctor) and the boys (as varied an assortment of teenagers as you can get including the alpha male, the nerd and the psychopath) look forward to. Tim is “everything they could possibly want in a leader: knowledgeable and serene, exuding confidence while bolstering their own.”

They’ve only just settled in when a boat arrives at the island   and a man disembarks.

A quivering string of drool spooled over his lip, hung, snapped. His skin was stretched thin as crepe paper over his skull. Capillaries wormed across his nose, over his cheeks and down his neck like river routes on a topographical map. His arms jutted from his T-shirt like Tinker Toys. The skin was shrink-wrapped around the radius and ulna bones, giving his elbows the appearance of knots in a rope.

The man is starving. So hungry, in fact, that Tim watches in amazement as the man “picked up a handful of coarse soil and stuffed it in his mouth.”

A day later, the man is dead and all hell has broken loose on the island.

The man has brought a bioengineered threat with him and it doesn’t take very long for the chaos to begin. The boys, who are loosely divided into factions anyway, start to crumble under the weight of their own terror. Shelley, who is clearly a psychopath, uses the circumstances to “play.” He is, by far, the most horrifying character to spend time with. I could barely read the words on the page.

The other boys are equally well-drawn and you’ll want them all to be safe (well, except for Shel) even when you realize it’s just not possible.

I’m going to say it up front: The Troop isn’t a book for the squeamish. I’m talking skin-crawling, page-skimming squick here. I’ve got a pretty strong stomach when it comes to the written word (I’m less brave when the violence is on the screen) but there were seriously parts of this book that were just….awful.

Cutter includes newspaper articles, courtroom depositions and interviews to help fill in some of the narrative blanks – information the boys and Tim would not be privy to in the circumstances. It all makes for page-turning, gloriously icky fun.