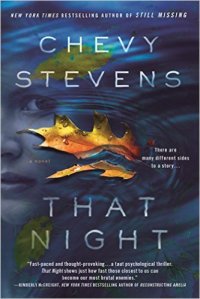 Flynn – except that, in my opinion, Flynn takes the prose prize and the plotting prize and, well, all the prizes, really. Sorry, Chevy.

This is the second novel I’ve read by Stevens. The first, Still Missing, won the International Thriller Writers Award for Best First Novel in 2011. I liked Still Missing, actually, though – if memory serves – I wasn’t keen on its ending. I didn’t like anything about That Night, although I wanted to. I didn’t abandon it to my Book Graveyard, though,  and I guess that’s saying something. Maybe it’s because Stevens is Canadian.

Toni Murphy and her boyfriend, Ryan Walker,  are in prison for the murder of Toni’s younger sister, Nicole. They maintain their innocence and while the evidence against them is circumstantial at best, they’ve both been locked away for fifteen years. (Not in the same institution, obviously.) The novel weaves between the events leading up to Nicole’s horrific murder, Toni’s incarceration and ultimate release (after serving her full sentence) and her attempts to reintegrate herself into society in her hometown of Campbell River, a town on Vancouver Island.

Toni is the problem child and Ryan is the son of a drunken criminal – so a bad boy by blood. Everyone seems to be waiting for them to get into trouble even though Toni seems more like a victim than a victimizer. She and Ryan are just waiting for high school to be over so they can get on with their lives together. Toni is especially anxious to get out of Dodge because of Shauna McKinney. “Most of the girls in our class either feared her or desperately wanted to be her friend, which I guess was kind of the same thing in the end,” Toni observes. Toni and Shauna used to be friends, but a misunderstanding over a boy changed all that and now Shauna does whatever it takes to make life living hell for Toni. Clearly, Toni is not as bad-ass as people think she is.

Nicole is the golden girl, the  mom’s favoured daughter because of her grades and sunny disposition. Until she starts hanging out with Shauna and her hench-women. Then she’s sneaking out of the house, coming home drunk and acting all weird.

Stevens’ first person narration allows us to see Toni’s journey through her final months in high school and then a sped up fifteen years in the big house where we watch Toni negotiate her way through a system that is bound to fail her. She makes friends; she makes enemies, and finally she is paroled. One of the conditions of her parole is that she has no contact with Ryan, who has also been released and who has also headed back to Campbell River. Despite the no contact rule which, if broken, has the potential to send them back to jail,  Toni and Ryan are determined to find out what really happened to Nicole.

Mostly I didn’t like That Night because I didn’t care about any of the characters. Toni’s parents were particularly irksome. Yes, it’s true that they’ve lost one daughter at, supposedly, the hands of another. But she swears she didn’t do it. How about a little faith, people?

When the true story of what happens is finally revealed, all the pieces click into place with precision, but ultimately this is less a mystery and more a story (sort of) of redemption. I found the writing a bit clunky – lots of exposition – and the characterizations superficial. For me, That Night wasn’t all that.

AT HOME: We Are All Completely Beside Ourselves – Karen Joy Fowler