It’s been a long time since I’ve read a book as whackadoodle as Another Little Piece. But I kinda mean that as a compliment because even though I often didn’t have a sweet clue how all the disparate pieces of Kate Karyus Quinn’s novel worked together, I couldn’t seem to stop reading. 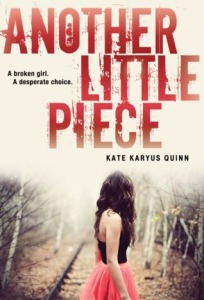 A teenage girl wanders out of a field, her feet “bare and bloodied” tugging at the “garbage bag she’d refashioned as a poncho.” She doesn’t know who she is or where she is. It turns out she’s Annaliese, missing and presumed dead for the past year.

Her identity and what happened to her is just one part of the mystery and quite frankly I’m not sure I’m up to trying to untangle the messy threads of Annaliese’s life because it’s not just Annaliese’s life. In fact, Annaliese isn’t actually Annaliese at all. It’s hard to say much, but  there’s definitely something not quite right about her. She’s a girl who watches a football player across the field and feels, of all things, a pang of hunger.

I could see the beads of sweat on his golden brown skin. Except it didn’t resemble sweat so much as the juices dripping from the crisp and crackling skin of a roasted chicken. I wanted to sink my teeth into him.

As Annaliese (let’s call this one Annaliese Two) tries to reconcile her new life in this body that isn’t hers, she starts to have flashes of memory. In the first memory she is standing in the woods watching a girl (the real Annaliese, let’s call her One) have sex with a football player (same as the juicy  chicken one) and when they are done and the boy has left her, Annaliese Two steps out from her hiding place and tells  Annaliese One that “It’s time to pay.” Payment, as it turns out, is pretty gruesome, but that’s how Annaliese Two gets from body-to-body. And she’s been doing it for a long time.

Despite the desire to bite someone, Annaliese isn’t a vampire, but she is something very old (I think) and very deadly. That said, she isn’t altogether unsympathetic. When she meets Dex, the reclusive boy next door, she starts to wonder if she might not have another kind of life, a real life, one that actually belongs to her.

I had a hard time keeping all the girls straight in the story and I think that after a while I just stopped caring so much about the logistics of the plot. I followed the through-line of Annaliese and glossed over the bits that made me go WTF. Another Little Piece is well-written, creepy and original. There’s lots for careful readers to gnaw on…and that line will be really funny once you’ve read the book.