Remember when Fifty Shades of Grey was all the rage? Sure you do.  125 million people bought that piece of crap. (Okay, yes, I read it. But I did not read its sequels. I have standards, people.) Suddenly everyone was reading erotica – loud and proud or behind the more secretive screens of their e-readers.

I love a good smutty book, but the problem with smut is that no two readers will be alike when it comes to what turns them on. Perhaps E.L. James just got lucky. In fandom, which are the loins from which her books sprang, BDSM is as common as sex in the missionary position with the lights off. My objection to the Fifty Shades book(s) had nothing to do with the subject matter (I spent ten years in fandom; I’ve read it all) and everything to do with the quality of the prose and one-dimensional characterization. (It couldn’t be any other way, Edward/Christian and Bella/Anastasia are about as one-note as they come.) 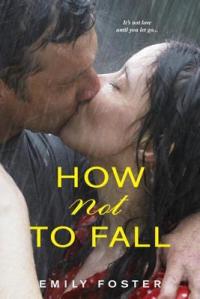 Enter How Not To Fall. Of course I’d seen this book at the book store, but I don’t think I even picked it up to read the blurb. Then I read a review – although I can’t remember where. The reviewer avoided comparisons with Fifty Shades, but did sing the book’s praises. Smart and hot – which is probably a pretty good combination. So, the next time I was at Indigo, I bought the book and now I’ve read it.

Annabelle (Annie) Coffey is a 22-year-old student at a university in Indiana. Dr. Charles Douglas is a 26-year-old postdoctoral fellow in Annie’s psychophysiology lab. He’s British and brilliant and “a dreamboat” and, technically, her teacher.  Annie’s been lusting after him for two years, but as her undergraduate degree draws to a close, she figures it’s about time to take matters into her own hands – so to speak. She tells her roommate and best friend, Margaret, that she is “going to ask Charles to have sex.” She asks, he declines, but Annie is convinced that she hasn’t misread the signals. She tells him

“The thing is, I think you and I have A Thing, and I know if I don’t at least put it on the table, I’ll always wonder ‘what if’ and so I’m just…putting it on the table, you know, and leaving it there. Like bread. For sharing.”

Turns out, Charles does reciprocate Annie’s feelings; he’s just too professional to act on them. So they make a deal – once all her research is in, once there is no possibility of a sex act compromising ethics – they’ll do it. Cue about 200 pages of smut.

Here’s what I really liked about How Not To Fall.

Am I a beauty queen? I am not. My nose has a great deal of character. My hair has some interesting ideas about its place in the world. My body is built more along the lines of a wristwatch than an hourglass – flat yet bendy. It works for me – I am my body’s biggest fangirl – but I recognize where it falls short of the culturally constructed ideal.

Charles is smart – like brilliant smart – but also kind and, as we learn gradually, a little bit damaged, too. Also, on the hotness scale – according to Annie “it is a mercy to the world that the man doesn’t try to look good.”

2.  The sex is well-written. That’s a big one for me. If I am going to read erotica, I want to read well-written erotica. And since How Not To Fall contains a lot of sex it might have easily gotten boring. You know – geesh, are they going to do it again? I didn’t skim. Actually, overall, the book is well-written.

3. Personally, I kinda loved the way the book ended – although it did break my heart a little. Apparently, there’s a sequel coming out next year. (I will probably read it: see #1.)

I did have a couple little things that irked me. Charles often sounded like a middle-aged man. He called Annie “Young Coffey” a lot. Like he was twenty years her senior rather than four. He also refers to her as “termagant,” a word I was not familiar with, so I had to look it up. It means a “harsh or overbearing woman.”  I couldn’t really make the connection. Also, I don’t have a foot fetish – clearly Charles does. Too much feet/toes for me. These are niggles, because overall, I enjoyed the book for all the reasons one might enjoy a book of this type.

So – if you are looking for a fun, smutty book to pack in your beach bag – give this one a go.