Every year for the past seven, I’ve transitioned from regular school to teaching a month of summer school. Why, you might very well ask? Mostly for the money – although this summer my paychecks hardly seemed like incentive enough.Obviously I can’t cover a year’s worth of curriculum in three and a half weeks, so it’s mostly trying to teach grade nine and ten students reading and writing skills that will help them be successful next year. We read some short stories and poetry and this year we read Lois Lowry’s The Giver (Grade 10) and Todd Strasser’s The Wave. I’d never read either of them, but I knew they were accessible, high interest and short enough to get through in the limited time we had.

The Giver takes place in a community that values Sameness. On the surface it might even appear like a Utopia. Eleven-year-old Jonas lives in a family unit lives with his younger sister, Lily, and his mother and father. None of them are biologically connected.  His life is structured around school and volunteering and ceremonies that mark the important moments in the lives of the citizens. He is apprehensively waiting the next ceremony. His mother tries to calm Jonas’s nerves by telling him

“Well, it’s the last of the ceremonies, as you know. After Twelve, age isn’t important. Most of us even lose track of how old we are as time passes, though the information is in the Hall of Open Records, and we could go and look it up if we wanted to. What’s important is the preparation for adult life, and the training you’ll receive in your Assignment.”

Feeling apprehensive is unusual for members of this community. Their lives are not complicated by hunger,  disease or even bad weather. Everyone has productive work to do. They share their feelings as part of a nightly ritual. They apologize immediately if they say something even remotely offensive to another member of the community. They start taking a pill as soon as they acknowledge “stirrings” of a sexual nature. The Elders make all the decisions and “Rules were very hard to change.” The very old, the very weak and those who commit crimes are “released.”

At the Ceremony of the Twelves, Jonas gets his assignment. He is to be the Receiver, which means he will work with The Giver, the community’s most important citizen. He alone holds all the memories and he will transfer them to Jonas. Suddenly the only home Jonas knows seems less like Utopia and more like a nightmare.

The Giver is a great book – suitable for all readers and filled with lots of opportunities to talk about what it is to be human, free-will and the value and importance of memory. I really enjoyed it and would definitely use it in the classroom again.

Todd Strasser’s novelization The Wave is less literary, but offers lots of opportunities to 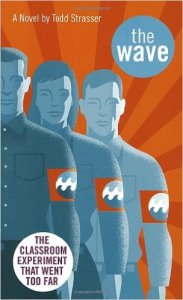 talk, too.  The book is based on the true story of  California history teacher Ron Jones’ social experiment. (He’s been renamed Ben Ross in this book.) The year was 1969 and Ross had just shown his senior class a film about the Holocaust. When one of his students asked how the Germans could have just sat back and let the Nazis do what they did, Ross tried to think of a way he could illustrate the power of a fascist movement. He came up with “The Wave” and began to teach his students about discipline, community and action. Although the experiment was meant to be short-lived, it grew to include a salute, slogans and even a secret police force before it was finally dismantled due to complaints from parents and colleagues.

Virtually every one of my grade nine students really enjoyed reading The Wave. It was easy to read, so it’s perfect for struggling readers, plus it offered a lot of food for thought.