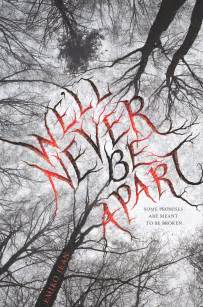 Seventeen-year-old Alice is a patient at Savage Isle, an institute for adolescents with mental health problems. She’s recovering after a devastating fire, set by her twin Cellie, killed her boyfriend, Jason.

In the prologue of Emiko Jean’s YA novel We’ll Never Be Apart, Cellie says

…I’ll say it was an accident. An unfortunate tragedy. But it was neither. When they asked me what happened that night, I’ll say, It was a mistake. But is wasn’t. I don’t remember, I’ll say. But I do.

After the death of their grandfather, Alice and Cellie bounce around to various foster homes. In one of those places, “the worst home yet,”  they meet Jason. Jason becomes their protector from their foster father. “He’d wrap his arms around us like a comforting blanket. He smelled of clean laundry, a smell that still makes me feel loved and protected. Cherished.”

Jason’s flaw is that he loves fire. Cellie does, too. Alice can only watch helplessly, but it doesn’t prevent her from falling in love with Jason. After his death, she vows revenge against her sister who turns up at Savage Isle, too, albeit in a locked ward. Alice needs another patient’s help to find her so she can kill her.

The story is told in present day – as Alice, with the help of Chase, attempts to find a way to get to Cellie, and also unfolds the girls’ tragic story through a series of journal entries.  Readers might sense that the narration is unreliable – and they’d be right. There’s a propulsive element to Jean’s story, as we follow Alice on her search for the truth of what happened the night Jason was killed.

We’ll Never Be Apart will probably be enjoyable to mature teens who like a twisty tale with a sympathetic narrator.