Lauren Oliver is well-known in the YA fiction world, but Rooms is her first novel for 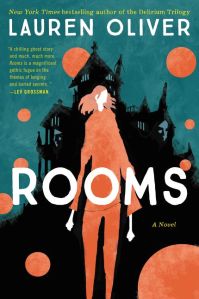 adults…although the distinction hardly matters, really. Rooms is the story of the Walker family, alcoholic mother Charlotte; twenty-something Minna, her single-mother daughter, and Amy, her granddaughter; and Trenton, her awkward teenage son. They’ve returned to the house they once called home to pack things up. Richard, Charlotte’s ex and the children’s father, has died and now it’s been left to them to pick up the pieces. They aren’t alone. The house is inhabited by two ghosts: Sandra and Alice.

All of these characters have stories to tell. Mostly they are stories of loss and dysfunction. Sandra and Alice, in particular, are trapped by their memories, which Sandra claims are “thick as mud.” These two women watch the Walker family stumble around with varying degrees of affection and distaste. Alice has tender feelings towards Trenton, who she remembers as a young child claiming that “For years, I’ve longed to see Trenton. He was the most beautiful child….” She can’t quite believe that the “absurdly tall, skinny adolescent, with the sullen look and dingy-dark hair”  who stumbles into the house all these years later is the same boy.

The Walker children don’t seem to have happy post-divorce memories of their father. Minna is caustic towards Trenton and indifferent toward her daughter. Trenton has clearly had a difficult time, too. He is virtually friendless and has recently been in an accident (the details of which are revealed slowly), which has left him physically damaged. He longs for someone in his family to tell the truth.

Everyone in his family lacked integrity. They were corrupt (antonym).  His mom, Caroline, was the worst. She had lied to everyone for so long, Trenton wasn’t even sure she knew the difference anymore.

Rooms doesn’t follow a linear narrative. There’s more than one story to be told here, and the ghosts want their fair share of the limelight. While Richard was still alive, Sandra and Alice took bets about where he would die. Alice wins, remarking “Richard Walker does not die at home. Thank God. I’ve shared the house with him for long enough.”

The house itself is a character. “It’s corners are elbows, its stairways our skeleton pieces, splinters of bone and spine.” Trenton takes a different view.

…they were just rooms, many of them empty and thus unfamiliar, like the rooms of a stranger’s house. It didn’t matter much. The past would come along with you, whether you asked for it or not.

Rooms is a family drama and a ghost story. It is a story about secrets, regrets and finding a way to forgive – yourself and others. I thoroughly enjoyed it.