Although it took the story a little while to get going, Jenn Bennett’s YA romance 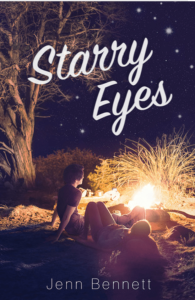 Starry Eyes ended up being a sweet love story with believable main characters.

Seventeen-year-old Zorie lives with her father and stepmother in Melita Hills, California. Her parents own a health clinic, acupuncture and massage and the like. Sharing the building with them is Toys in the Attic, a sex shop owned by Sunny and Jane, married mothers to Lennon. Lennon and Zorie used to be besties. Childhood friends whose feelings for each other had crossed the line into something more complicated before Lennon ditched Zorie, without explanation, Before the homecoming dance. Now the two are barely speaking to each other. And Zorie’s father seems to have a total hate-on for Lennon and his moms now, too.

It’s the summer before senior year and Zorie is in hard-core planning mode. She’s a planner because “Spontaneity is overrated.” When she is invited on a glamping trip (high end camping) with her “kind of, sort of friend” Reagan, she really doesn’t want to go. Her mother thinks it would be good for Zorie to go, though, and when Zorie finds out that Brett, “a minor celebrity in our school” will be going, Zorie agrees to go with.  Zorie has been “nursing a crush on him since elementary school” and the two had exchanged one kiss at a party. There’s also the problem that Zorie has recently discovered that her father has been cheating on her mom and she needs some time to decide how to handle the discovery.

Things get complicated when it turns out that Lennon is also going on the trip.

The first third of the book sets up this premise, and it’s the part of the book that moved the most slowly for me. When I was done reading, I did understand why some of this set up was important, but for the me, the best part of the book was when Zorie and Lennon suddenly find themselves on their own in the woods.

Being alone gives them a chance to talk, something the two hadn’t really done for a long time. There’s real energy between the pair, sexual energy, for sure, but also something more powerful: Zorie and Lennon clearly care very deeply for each other. As they walk through the woods, they talk. They are not distracted by the outside world and the solitude gives them time to reveal long-held wounds.

Readers will root for Zorie and Lennon. These are imperfect teens, but they also felt real to me. There’s a beating heart at the centre of this romance.