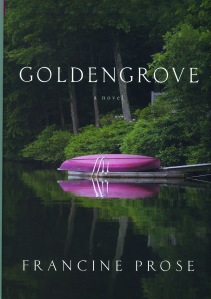 Nico is just thirteen when her seventeen-year-old sister Margaret drowns. Nico tells us “We lived on the shore of Mirror Lake, and for many years our lives were as calm and transparent as its waters.” Margaret is the poet in the family, the beautiful daughter about to graduate from high school and head off to study music. She was named for Gerard Manley Hopkins’ poem “Spring and Fall: To a Young Child.”

Nico is “Debbie Downer.” She doesn’t resent her older sister; she admires her. Her beauty, her talent, her relationship with Aaron.

Francine Prose’s novel Goldengrove follows the summer immediately following Margaret’s death and it is a masterful meditation on grief. Margaret’s death is “like a domino falling and setting off a collapse that snakes out toward the horizon and spills over into the future.”

Nico and her parents struggle to make sense of Margaret’s drowning, and they retreat into their own lives. For Nico’s mother Daisy, it’s a cocktail of pain-killers; for her father, it’s working on his book about how different cultures viewed end-of-days. For Nico, it’s Aaron, the beautiful boyfriend Margaret left behind. Over the course of the long, hot summer she and Aaron drift perilously close to each other in an effort to mend their broken hearts.

I didn’t care that he was a boy. An older guy. A relative stranger. At that moment, he was the person who knew me best in the world.

And she and Aaron do feel the same about the loss of Margaret. Aaron tells Nico

…the strangest part is that she was alive and now she isn’t. That’s the thing I can’t get past. I can’t get my head around it. The absence. How someone can be here one minute, and the next minute they’re gone. You tell them everything in your life and then they…can’t be reached. Unlisted number forever.

I loved Goldengrove.  If Nico sounds perhaps too worldly for a kid, it’s because she is telling this story from a place far in the future. From this vantage point, she understands that “time layered over everything, cementing in the gaps, repairing or covering over what was cracked and broken, pressing it down into the earth and building on top, and on top of that.”

Goldengrove is a coming-of-age story, and a story about grief that it is beautifully written and crackles with energy.