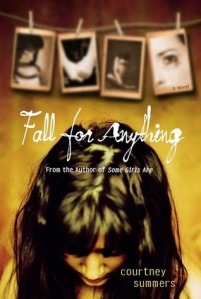 Seventeen-year-old Eddie and her mother have recently suffered a tremendous loss. Eddie’s father, a once-renowned photographer, has taken his own life and neither of the Reeves women are coping very well. Eddie’s mother drifts, ghost-like, around the house wearing her father’s housecoat being fussed over by her best friend, Beth, who drives Eddie “fucking crazy.” Eddie avoids her house as much as possible, choosing instead to hang with her best friend, Milo.

Milo would do almost anything for me. He’s been my best friend since second grade, when a brief but weird obsession with the original Star Trek  got him sort of ostracized at the same time all the girls in our class decided a girl named Eddie must actually really be a boy. By third grade, we weren’t so outcast anymore, but we were beyond needing other people. We still are.

Eddie is trying to make sense of her father’s death, and she is pulled back to the place where he ended his life: Tarver’s Warehouse, an “old and abandoned” building.

I come at night, waiting for some piece of the puzzle to click into place, waiting to understand, and I stay until the living world presses in on me and I have to go back to it…

She is surprised to meet Culler Evans, a protege of her father’s, at Tarver’s. Culler tells Eddie that he knows her father “spent a lot of time here, so I’ve been coming out, just trying to figure it all out, I guess. I mean, to understand why he’d …”

The two instantly bond over their desire to understand this inexplicable suicide. When it appears that Mr. Reeves has left a series of clues that might unravel the ‘mystery’ of his suicide, it sends Culler and Eddie on a road trip.

Canadian YA writer Courtney Summers (Sadie, All the Rage, This is Not a Test, Cracked Up to Be, Some Girls Are)  has created yet another memorable character in Eddie Reeves. This makes the sixth of her books I’ve read and I have not once been disappointed to spend time with her characters. I always find her protagonists to be flawed, tough and vulnerable in ways that make them extremely sympathetic.

Eddie is no different. Her grief is palpable. It manifests itself in her hands, which she claims are dying, and in the ways she pulls people in and pushes them away. Even her escape route at night (she climbs out of her window and jumps to the ground) seems fraught with meaning. “I jump” she says. “It’s effortless. It is so easy.”

Fall For Anything is all the things a great YA book should be (well, all the things any great book should be): well-written, compelling, page-turning and with emotional heft. I held off reading it as long as I could because now I have to wait until February 2021 for The Project, Summers’ next novel. I know it will be worth the wait.