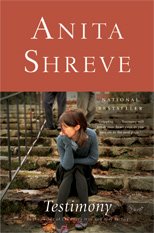 Explosive… Shreve flawlessly weaves a tale that is mesmerizing, hypnotic and compulsive. No one walks away unscathed, and that includes the reader. Highly recommended. – Betty-Lee Fox, Library Journal

Pretty much everyone has raved about Shreve’s latest novel, Testimony. I’ve been a Shreve fan since Eden Close, so I was looking forward to reading this book. The novel opens when Mike Bordwin, headmaster of Avery Academy, a private New England boarding school, views a tape depicting three of the school’s top basketball players having sex with  a female student who is clearly underage. While the story opens with Mike’s point of view, the novel flips back and forth allowing us to see how this event and its aftermath affects everyone concerned: the so-called victim, the three boys, their families and even members of the press called upon to report the event once the story is leaked from the school’s hallowed halls.

Shreve is  a talented writer and she manages to make individual characters come alive in this novel by employing third, first and even second person points of view. When the young girl speaks, she seems every bit like a fourteen year old, both naive and culpable. One  boy’s mother speaks in the 2nd person – perhaps to distance herself from the news that her son has done something reprehensible, inexplicable.

It may seem odd that the story’s inciting action is revealed in the novel’s opening pages, but as it turns out, the story unravels to reveal another event which contributes to at least one of the boy’s bad decisions. Silas’s story is heartbreaking and, for me at least, he  carried much of the story’s emotional weight on his shoulders.

We had an excellent discussion about this novel at Indigo’s book club. The ripple effect this event sends through the school and community- upsetting lives and relationships- was immensely powerful. In less confident hands, the novel might have slipped into tabloid sensationalism. Not for Shreve; she’s far too good a writer and Testimony is far too good a book.

AT HOME: The Vanishing Half – Brit Bennett