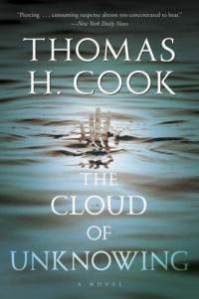 It was bound to happen sooner or later;  my first Cook novel to elicit a lukewarm reaction. That’s not to say it was horrible; I don’t actually think it’s possible for Thomas H. Cook to write a horrible novel. The Cloud of Unknowing was a bit of a bust for me, though.

David and Diana Sears were raised by their brilliant but scizophrenic father.  Now they are adults and they carry all the baggage from that often difficult childhood. David is a married lawyer with a teenage daughter. Diana is also married, with a young son who suffers from mental illness. We meet David as he sits in an interrogation room at the local police station. Diana’s young son, Jason,  has drowned and Diana blames her husband, Mark.  More than blames him; Diana thinks Mark has murdered their son.

The Cloud of Unknowing cleverly weaves David’s deposition  and the backstory necessary to make Diana’s story both believable and suspect. David is, as many of Cook’s protagonists are, an average man – honest and hard working.  This novel has less to do with the mystery surrounding  Jason’s death, and more to do with David’s feelings of helplessness as Diana’s fears about Mark grow and as she pulls other people into her orbit.

I can’t fault Cook’s writing. As always, I turned the pages quickly. The Cloud of Unknowing  just didn’t have either the emotional payoff or the clever twist I’ve come to expect from Cook’s novels.  My ho-hum feelings about this novel in no way undermine my deep admiration for Cook’s work. I intend to read every single one of his novels: I love him that much.