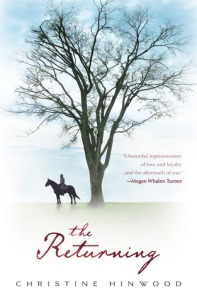 I read a lot more Young Adult fiction.  I do it so that I can have conversations with students in my classroom. I read some YA because it sounds interesting to me. Recently, I volunteered to help review some books for the Dept of Education, books which have been selected for possible inclusion on the sanctioned reading list and thus destined for English classes in middle and high school. That’s how I came to read Christine Hinwood’s debut novel, The Returning.

The Returning, a Printz Award winner, is the story of how the aftermath of a domestic war between the Uplanders and Downlanders affects a disparate group of people including Cam Attling (a returned soldier), Pin (his younger sister), Graceful (Cam’s fiance) and Lord Gyaar (the man who saved Cam’s life). It’s alternate historical fiction – which reads like fantasy because the world is sort of, well, otherworldly. Is it the past? Future?

While not without its merits, Hinwood’s book didn’t appeal to me. The story is elliptical in nature, jumping around in time and place – never settling with one character long enough to allow the reader to really get to know them.

Cam is the only man from his village to return from the war and he’s having a difficult time adapting to life back on his father’s farm. Other villagers always want him to talk about what happened to their husbands and sons and brothers, but Cam just wants to forget. But it wasn’t just Cam’s war  – the world has changed for everyone. Da explains the war to Pin as a rock that has been:  “thrown and done, but the ripples do take longer to spread and flatten. That’s what this is, the ripples.”

I understand why Hinwood didn’t want to focus entirely on Cam – the war has affected many other people (including those from the winning side) – but I just couldn’t seem to keep everyone straight. Perhaps it was all the strange names: Diido, Hughar, Acton. Maybe it was the unusual way the characters spoke – although the writing was often quite beautiful. Maybe Hinwood was too ambitious, trying to capture the aftermath of war for too many players.

I just didn’t  feel like I truly knew any of the characters and so, for me, The Returning just didn’t have the emotional impact I had hoped it would