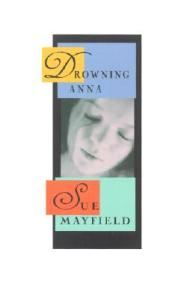 When Anna Goldsmith moves to Yorkshire from the south of England, she finds the transition difficult – that is until Hayley Parkin, the most popular girl at school, takes Anna under her wing. Sue Mayfield’s YA novel Drowning Anna unspools the story of Anna’s relationship with Hayley, which deteriorates almost as quickly as it began.

Drowning Anna combines third person narration with Melanie’s reflections and entries from Anna’s journal. From all these different points of view, we come to understand what has driven Anna to such a commit such a drastic act. Anna is a very relateable character. She’s smart, athletic, musical and attractive – but she’s also 14 when the story starts and given to bouts of self-doubt. Hayley Parkin is not the only thing wrong with her life: her teacher-mother is stressed out and moody, her doctor-father is never home; her older brother, Tom, is busy with his own life and doesn’t always live up to expectations – meaning there is extra pressure on Anna.

None of that explains, however, why Hayley decides to focus so much malevolent energy on Anna. She starts small by ignoring her, but it doesn’t take long for the harassment to extend to mimicking her accent (which, granted, means less in a Canadian context but having lived for a time in the UK, I understood this as a tool of torture), isolating Anna and actually physically hurting Anna.

Hayley, it seems, has a lot of charisma. The other students want to be in her orbit, but it feels sort of like, “keep your enemies closer.” We don’t ever get a clear understanding of why Hayley is so hateful, but it hardly matters. At the end of the day, Hayley will have to live with her choices.

Mayfield really captures the very particular cruelty of teenage girls. Anyone who has ever been bullied will see themselves in Anna Goldsmith.