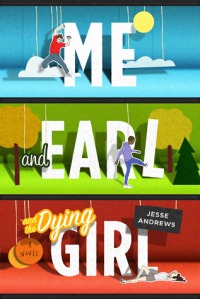 This book contains precisely zero Important Life Lessons, or Little-Known Facts About Love, or sappy tear-jerking Moments When We Knew We Had Left Our Childhood Behind For Good, or whatever. And, unlike most books in which a girl gets cancer, there are definitely no sugary paradoxical single-sentence paragraphs that you’re supposed to think are deep because they’re in italics.

Meet Greg Gaines. He’s the seventeen-year-old narrator of Jesse Andrews’ debut novel Me and Earl and the Dying Girl.  He lives with his parents, and two younger sisters in a Pittsburgh suburb. He’s a trash-talking, cynical, slacker who is just trying to make it through his final year of high school.

Greg goes through the days in a weird state of disconnect because he feels as though the only way to survive school is to stay on the periphery of all the various groups, rather than belonging to any one of them.  He says, “I didn’t join any group outright, you understand. But I got access to all of them.” Of course, that makes having real relationships slightly problematic.

Greg’s only friend is Earl; well, as Greg puts it, they are more like co-workers.   They’ve known each other since they were in kindergarten and discovered a shared love of movies. Since then they have made several films together.

So Greg goes through his days doing as little as possible, using his sense of humour to cover up the fact, I think, that he is insecure about his weight and his looks and his life (all totally relateable to anyone who has ever survived a difficult – or any –  high school  experience.) And then Rachel Kushner is re-introduced to his life.

Greg and Rachel had been sort-of friends when they were kids although Greg admits that he hadn’t been all that nice to her. Turns out Rachel has recently been diagnosed with leukemia and Greg’s mom calls in a favour – rally around Rachel.

Me and Earl and the Dying Girl is not a cancer book, though. It is a profane, often funny and honest look at a teenager on the cusp of adulthood who doesn’t get it…and then does. Despite a great family, Greg is sort of closed off to the world. He doesn’t know how to have authentic relationships even though he is clearly capable of them. He spends his time with Rachel making lame jokes, trying to divert the focus away from Rachel’s illness –  not for her benefit, but for his own.

There is no way Greg is going to come away from spending time with “the dying girl” unscathed and he doesn’t. Mature readers won’t either.

I read this book as part of a program that lets teachers read books being considered for classrooms in New Brunswick. I do think this is a worthwhile and well-written book. My one caveat would be that there is a lot of swearing. A lot a lot. That said, as a high school teacher and a mom of teenagers I think we are fooling ourselves if we think kids don’t talk like this (not my kids, of course!). I think we do mature teens a disservice by leaving books like this off the shelf. I think some students will see themselves in Greg and Earl and it would be a shame not to give strong readers the opportunity to share time with them. I don’t believe in censorship anyway, but beyond that Me and Earl and the Dying Girl has real merit.