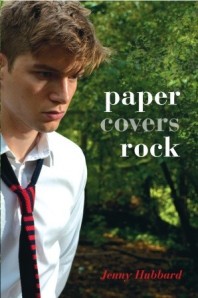 Jenny Hubbard, the author of Paper Covers Rock, was a high school and college English teacher for seventeen years and I am guessing she was a good one. Her debut novel is filled with  references to poetry and literature and how they make us have “the feels” and allow us to connect with the world etc.

Sixteen-year-old Alex Stromm attends Birch Academy, a boarding school in North Carolina. He is, by his own admission, a good solid kid. When the story opens, Alex is writing in a journal his father had given him to write his impressions in when he’d started at Birch two years previously. Although the book has remained blank, now has something to write about: his friend Thomas is dead. He writes:

What I carry in my backpack down to the river, I carry not knowing that in less than an hour Thomas Broughton will be dead. That is not a knowledge I carry yet, but I will carry it soon – the knowledge of my darkest self – and I will carry it forever.

The reader learns about what happened that fateful day when Alex, Thomas, Clay and Glenn were at the rock by the river in fits and starts. Alex’s feelings of grief and guilt are only part of what compels him to scribble in his journal. He is also in love with his English teacher, Miss Dovecott, a recent Princeton graduate who is only a few years older than the boys she teaches. When she takes an interest in Alex’s writing he becomes even more conflicted about what happened that day on the rock.

Sounds sinister, eh? It’s not really, but I have to say that I did keep turning the pages and read the book in one sitting. Alex’s feelings for Miss Dovecott are complicated by his feelings of loyalty for Glenn. (Clay has taken the blame and left school; I’ll leave you to discover the reason why on your own.) Turns out that just after Thomas drowned, drawn by the screams, Miss Dovecott arrived on the scene and Glenn is convinced that she knows more than she is letting on. Oh what a tangled web.

And I have to say, the writing is stellar. The poetry Alex writes is lovely and it’s easy to see why Miss Dovecott takes an interest in him. Ms. Hubbard captures the male voices beautifully (not as crass as they might be now because, after all, the story is set in 1982) and also manages to make Alex both sympathetic and self-serving on his journey to manhood.