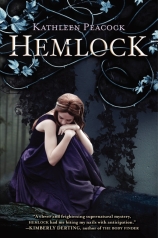 So this rarely happens to me. The other night, after I turned my light off, I couldn’t turn my brain off and so I stared at the shapes in my room until 1 a.m.. Then I turned my light back on and raced through the final 100 or so pages of Kathleen Peacock’s debut novel, Hemlock.

Seventeen-year-old Mackenzie ‘Mac’ Dobson lives with her cousin, Tess, in the small town of Hemlock.  Her close knit circle of friends, Jason, Kyle and Amy, have recently been reduced by one: Amy was found dead in an alley, victim of a werewolf attack.

Mac is suffering from very disturbing dreams brought on, she believes, by a guilty conscience. Amy had called her the night she’d died, but Mac had blown her off so she could study. But her grief and guilt are compounded by other issues: her growing feelings for her best friend, Kyle; Jason’s increasingly erratic behaviour after the death of his girlfriend, Amy, and the arrival of the Trackers, specialized werewolf hunters. On top of all this, Mac decides she is going to figure out what really happened to Amy on the night she was attacked.

There’s a lot going on in Hemlock – the town and the book. Here’s what I liked:

– I liked the fact that the whole werewolf thing just ‘is’. Werewolves exist, let’s move on. In Peacock’s version of the lore, anyone  who is scratched or bitten by a werewolf (at least those that survive the attack) become infected with lupine syndrome. Those people are captured – where it is possible to find them – and sent to rehabilitation camps. (I immediately thought of the Nazis rounding up the Jews and whether this comparison was Peacock’s intention or not, it actually works on all sorts of levels.)

– I also liked how there were werewolf supporters, sort of a ‘live and let live’ faction, which means that anyone who shares this view is also in danger of persecution, thus upping the stakes for a whole bunch of other characters. Mac is decidedly on the fence about this issue:

…I knew not all werewolves were good. Some of them did attack and kill people. And one of them had killed Amy. But Charles Manson, the kids from Columbine, that guy with the Kool-Aid – regs did horrible things to each other, too.

– I liked how propulsive the narrative was. I think Peacock really excelled at moving things along, especially when it came to fight scenes, or scenes where the wolves transformed from human to wolf.

– I liked Peacock’s sense of humour. Sometimes the dialogue made me chuckle.

But here’s my problem. Werewolves.

I have no problem with fantasy worlds built around creatures of the night. I have a healthy imaginary life which involves virile vampires. Trust me, I get it. But I don’t get werewolves. There’s nothing sexy about them. Or particularly sympathetic, even. (Yeah, I know, they didn’t ask for this life.)

I was invested in Mac’s quest to find out the truth about Amy. I was less invested in her love triangle, a sort of Bella, Edward, Jacob thing. There was something contrived about it that just didn’t work for me. Bottom line: I didn’t care about them. Jason’s a douche. Kyle is in full-on push pull mode. Both have their reasons; all will be revealed, but I never settled into a space where I wanted her to be with either particularly and that’s a problem in a paranormal romance.

And I felt like there was perhaps a tad too much going on in the opening book of a trilogy. Love. Duplicity. Politics. Family issues. Murder and Werewolves. All the pieces click together neatly by the end though and will leave fans howling for Hemlock‘s sequel. Thornhill.

I have had the pleasure of ‘meeting’ Kathleen Peacock – virtually. She graciously agreed to speak to students at last year’s Write Stuff workshop. We linked Kathleen via the Internet and had Riel Nason, author of The Town That Drowned with us at the venue and both authors talked to the participants about the perils and rewards of writing. It was really exciting for me and for the students, too. How often do you get to talk to published writers? Kathleen is funny and smart and honest in person – well, you know what I mean. She’s also geeky, which appeals to me. I predict she has a long and successful writing career ahead of her.

45. Behind the Red Door – Megan Collins

42. All These Beautiful Strangers – Elizabeth Klehfoth

41. Our Kind of Cruelty – Araminta Hall

40. Near the Bone – Christina Henry

33. Empire of the Vampire – Jay Kristoff