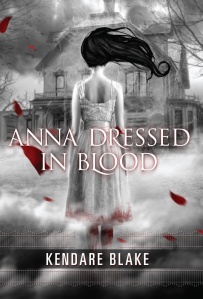 I love the cover of Kendare Blake’s YA novel Anna Dressed in Blood. And I loved the first 200 or so pages of the book, too. And then – not so much. Of course, the first clue that things might have the potential to go south was Cassandra Clare’s ringing endorsement. But okay – I was ultimately willing to overlook that. The plot fell apart for me…and the characters…and it just felt like a hot mess by the end.

But in the beginning…

Cassio ‘Cas’ Theseus Lowood kills the dead. He’s got this cool athame (a double-edged daggar) and his dead father’s blood connection to these things that go bump in the night. Cas and his mother (who sells occult supplies on the net) travel from place to place so that Cas can put the dead to rest.  Cas is just 17 but he’s already “seen just about every variety of spook and specter you can imagine.”

Cas and his mother are en route to Thunder Bay, Ontario where the particularly vicious ghost of sixteen-year-old Anna Korlov ‘lives’ in a crumbling Victorian house. Anna’d had her throat slashed on her way to a school dance in 1958 and now she’s been known to haunt her house, wearing the white dress she’d had made for the dance only now covered in blood – hence the name ‘Anna dressed in blood’.

Cas is uneasy about this one from the start, but other things don’t go his way either. First of all – he’s usually able to fly under the radar, but not in Thunder Bay – where he quickly makes friends (and enemies) which necessitates him ‘coming out’ about his ‘calling.’ Sound familiar. Don’t worry – the one-girl-in-all-the-world ‘s name will be dropped before it’s all over.

Blake does create some creepy-crawly fun

Her feet drag horribly along like she can’t use them at all. Dark, purplish veins cut through her pale white skin. Her hair is shadowless black, and it moves through the air as though suspended in water, snaking out behind and drifting like reeds. It’s the only thing about her that looks alive.

She doesn’t wear her death wounds like other ghosts do. They say her throat was cut, and this girl’s throat is long and white. But there is the dress. It’s wet, and red, and constantly moving. It drips onto the ground.

Blake has set herself a difficult task; she has to make Anna both menacing and sympathetic and I think she manages, for the most part. That success comes, partly, from the fact that Cas is a likeable narrator: smart and  resilient. Since we see Anna through Cas’s eyes, we can empathize with her story – which is told via a brief seance-like flashback. Blake had my full attention up until then because that’s about when Cas starts to realize that his feelings for Anna aren’t strictly professional.

And then the kissing starts and – um – how do you kiss a ghost? I would have much preferred a heaping helping of angst to go along with my horror.

Blake further complicates the story with the introduction of the creature who had killed (aka eaten) his father and then the story just sort of falls apart…leading us to the inevitable sequel.

The ingredients for a terrific novel are all here. Blake’s writing is propulsive and straight forward. I think there’s just too much going on: a Dean Winchester-esque hero, wannabe Scoobies, a family friend who sounds suspiciously like Rupert Giles, ghosts aplenty, and a star-crossed love affair that isn’t quite believable.

Too bad – there was so much early potential.